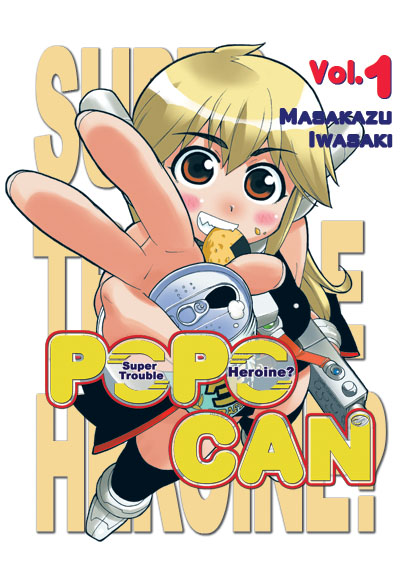 Popo Can is a lesser known manga from Infinity Studios that was released in July of 2005. I thought the title looked interesting, so decided to take a shot at reading it. I’m really disappointed that this manga hasn’t gotten more recognition!

Story:
Koizumi Yasuharu is a normal elementary school kid. He’s into video games, and his latest purchase is “Taichiro Yamagishi’s Debate RPG.” When he starts the game up, a beautiful girl named Popomi pops out of the screen and begins her quest to defeat her “target.”

Instead of actively pursuing her target, however, Popomi just reads manga and drinks beer all day. Either that, or she’s finding ways to destroy Yasuharu’s (who she calls “Yoshio”) house. Luckily they have a maid robot named Stinger-Z to clean up.

An enemy character named Hiropon shows up too, though Yoshio actually welcomes her since it means that the game is actually making some progress. Ironically, Hiropon is actually a nicer character than Popomi.

To round out the cast is Miko Chino, Yoshio’s love interest (though he probably doesn’t realize it himself). She becomes jealous of Popomi’s proximity to Yoshio and constantly challenges Popomi to duels. Oh, and there’s also Yoshio’s perverted grandfather.

Analysis:
Popo Can is, in essence, one giant parody. I probably haven’t figured all of them out, but the way that Popomi pops out of the TV is reminiscent of Video Girl Ai. I have a feeling that Stinger-Z is a parody of Mazinger-Z. The manga also parodies stuff like Iron Chef, shounen manga super power ups, and video games in general (Popomi’s Bust ‘Levels Up’ 1cm!).

My ultimate favorite genre is probably best described as “stupid gag,” and this Popo Can fits this genre perfectly! It’s not quite as dumb as Bobobo-bo Bo-bobo, though. It reminds me a lot of Jungle wa Itsumo Hare Nochi Guu in the sense that there’s this weird girl who ruins the life of the male protagonist. The gags work really well, and I really don’t know if I’ve laughed this much reading any manga before.

Unfortunately, it seems that the original response to the first volume of this manga was pretty weak, and it looks like they may never release the next volume! It was originally supposed to be released in September of ’05, but obviously that didn’t happen. Maybe I can start some kind of “bring back Popo Can” campaign! I seriously want to read the next volume…

Character Designs and Art:
The average manga reader might not like the art style used in Popo Can, but I love it. Stuff is mostly drawn in SD, or drawn seriously for comedic effect.

The character designs are all pretty good. Popomi herself switches between cute and yakuza ojou at will. Miko also likes to switch from the cute school kid look to S&M gear… I really like the design of Hiropon, which is probably due to the glasses. One thing I did notice was that all of the characters have really fat hips. I mean, in comparison to other manga character designs…

The Actual Book:
While the cover is nice and there’s a cool color insert, the rest of the book feels kind of cheap. The paper is nice and white, but it’s also somewhat thin. I noticed immediately that you could see marks from the other side of the page when reading since the pages were so thin. I guess I must’ve blocked it out after the second chapter or so, since it stopped bothering me.

Conclusion:
Popo Can is awesome! If you’re into gag parody manga, I strongly recommend getting this. Unfortunately, it seems the second volume’s release date is still uncertain. I really hope that Infinity Studios decides to release it some day…

Many thanks to Infinity Studios for providing me with a review copy of Popo Can Volume 1. You can actually preview the first few pages on the official website!

As far as parodies go, I think the title has to be a parody of “Popotan”.

Yes, that’s what I thought too.

I thought it might be the case, but the manga doesn’t really resemble Popotan at all, so I figured it was just a coincidence.