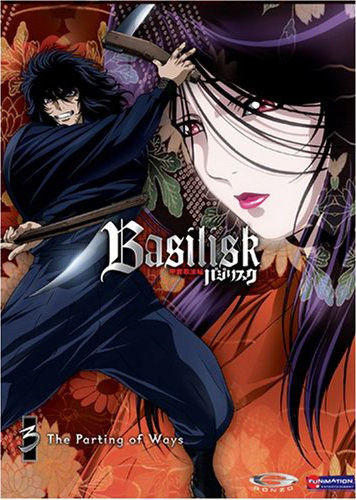 Now that all of the ninja know that the anti war pact is off, it’s time for everyone to flip out and start cutting off heads, right? Right!? Here’s my review of Basilisk Volume 3.

Story:
In this volume of Basilisk, Gennosuke and his posse leave the Iga stronghold and regroup. Before doing that, Gennosuke shows off his ninpo, which I like to call “Jisatsu Beam! (è‡ªæ®ºï¿½?ï¿½ãƒ¼ãƒ )” Yep, Gennosuke just stares at people, causing them to kill themselves. What a scary dude… He ends up getting Koshiro to blind himself with a whirlwind technique.

Meanwhile, Oboro is torn when she finds out that the two clans are at war again. She gets all emo and seals her eyes up so that she won’t interfere with either ninja groups. Gennosuke gets the has his eyes sealed to match, but still manages to kill the hairy ninja guy. Saemon seems to have his eyes sealed all of the time anyway. Between these people and the guy who’s already blind to begin with, I think the non-seeing characters are starting to outnumber the seeing ones…

The DVD ends with Saemon and Hotarubi ready to duke it out! I should mention at this point that Hotarubi is way cute, and that she should get her own spinoff show if she survives the ninja war.

This volume of the anime really heated things up, but it was quickly cooled down when the dreaded recap episode appeared! Sure, it had some new animation featuring Hattori Hanzo, but most of it was just recapping the fights.

The Actual DVD:
The version of the DVD that I got was just the normal one. No LE for me. The special features on the DVD included Textless songs (again), trailers, and the “Behind the Scenes of Basilisk” original Japanese Extras.

The behind the scenes stuff was the most interesting part of the extras. It basically features the voice actors discussing the show, reading fan letters, and writing haikus about the show. Gennosuke’s voice actor is really crazy, which is kind of weird since his character is so serious.

Also, Sugita Tomokazu shows up on both of the bonuses. I was just sitting here listening to the bonus while writing this review, and was like, “hey, is that Kyon!?” It turns out that Kyon/Yuuichi’s voice actor is also in Basilisk. If you’re a big fan of Sugita Tomokazu, be sure and check out the special features to see him in the flesh!

Conclusion:
Although I could’ve done without the recap episode, the increasing action and the addition of Kyon makes this DVD pretty cool. That and the anime is about freaking ninjas! Unfortunately, I’ve run out of DVDs, so I’ll have to wait until January when the next volume comes out to continue.