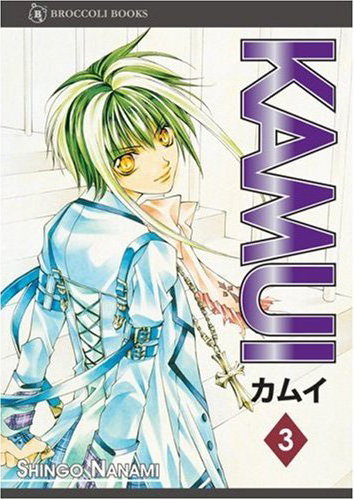 I’m continuing to try and reduce my backlog of Kamui. I did a quick read of volume 3, so here’s my (also) quick review!

Summary:
In this installment of Kamui, we learn more about the mysterious pasts of our main characters. Apparently, Sumire was one of the first test subjects of the NOA. She became obsessed with one of the scientists there, which is the reason that she wants to get further into the organization. Also, Kamui are gods!?

Almost the entire volume is Atsuma, Sumire and Shui trying to break into NOA. Once they find Shiki, the main general of NOA, a super omega battle occurs! After that battle, they move on to fight the head scientist of NOA, Hasumi.

Somehow, Atsuma is seperated from his Kamui, Kojomaru. Also, we learn that the flipping out of Atsuma from last chapter has caused a Kamui to awaken within Aika. I think… The volume ends with Sumire stabbing Atsuma in the back (literally!).

Analysis:
So this volume really really confused me. I think it had to do with the flashbacks and jumping around temporally. The transition from the fight with Shiki to Hasumi was also sort of confusing. Maybe I should read the manga again.

I liked the previous volume since it was more lighthearted and had Anzu in it. In this volume, Anzu only showed up for a brief moment. I was sad. I think they should make a spinoff called “Anzu Days” or something.

Perhaps this volume is supposed to be confusing on purpose. I dunno. I’ll keep reading and maybe the story will make more sense in the next volume.