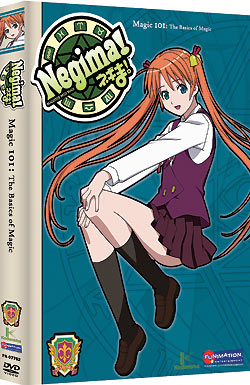 While Japan gets SHAFT-style Negima, the US is getting plenty of the original series. I recall watching this entire anime on fansub and thinking it was bad, yet irresistible at the same time. So can I really go back to XEBEC after getting a taste for SHAFT? (That sounded bad…)

Story:
Negi Springfield is a brand new teacher at Mahora All Girl’s Academy. He’s got a bachelor’s degree and is an English teaching machine! The only thing is that he’s just 10 years old. Plus he’s a full fledged magician. His father was a legendary magician, and Negi wants to follow in his footsteps.

His mission, if he chooses to accept it, is to teach a bunch of middle school girls English. Wait, how is this related to magic?

Analysis:
While there’s not a whole lot of development in this first DVD, we at least get a good idea of who all of the girls in the class are. As stated before, my favorites are Chao Rinshen, Saotome Haruna, and the ghost. Asakura Kazumi is also kinda cool too.

I never really thought about the fanservice for this anime until someone noted that there’s a lot less in the SHAFT version. When I watched the DVD, I was pretty surprised how often panties showed up. Also, the scene where Asuna’s boobs explode was kinda overboard.

Overall, I think I still have the opinion of the original Negima that I had before: It’s a decent anime that’s somewhat bad, yet I still really enjoy watching it anyway.

The Actual DVD:
This first volume is kind of interesting in the fact that it has 6 episodes. Most anime DVDs typically have 4 episodes, so it’s like you’re getting 50% more! There’s a few extras, like character profiles (but not for all of them), a short essay about schools in Japan, and the OP in textless mode.

I didn’t get the special edition, but apparently it includes a nice box, a little Asuna figure and stickers. Problematic got it so I guess she could tell you more about that.

Like any good anime dvd, this one included both English and Japanese audio tracks. I watched the first episode in English. Negi’s British accent isn’t really that annoying; it’s just distracting. Overall the voice acting isn’t bad, but I found one big issue. The English actors stress the wrong syllables for the Japanese names. So instead of stressing the “a” in Asuna, they stress the “su” and it becomes “Asoona.” Having studied Japanese for more than three years now, I can’t really get used to the names being said that way.

Conclusion:
Negima is by no means the greatest anime ever. I have a feeling that the manga is better (I need to pick that up!). Still, for some reason I really like this anime anyway. It could be the catchy OP that changes throughout the series… I’d suggest picking this up if you like the Negima manga or you can’t wait for the SHAFT version to get licensed.

Many thanks to Funimation for supplying me with the review copy of Negima.

Oh cool, they squeezed in more than 5 episodes, rare for a DVD. Perhaps most of the character introductions are in those first 6 episodes? I wouldn’t know since I couldn’t move myself to watch the anime.

The short essay about schools in Japan is cool though (yay for random information). Voice actors pronouncing names wrong is not at all good, since, well, that’s bad… yeah.

Del-rey did a great job with the translation. Its well worth the $5 a volume to get 1-12 from them. After that, yeah, DL. Too bad there is no piracy on the internets.

On a completely unrelatede note, I love AQUAtic STARs and SUBmarines alot.

It doesn’t cost $5 per manga…that’s insane (unless you got it from ebay or on sale from a random site). There’s no profit whatsoever if they did that.

LOL the box is pretty…. It was worth spending $40 for it! XD

Negi’s dub voice is Welsh. not British.
i hope Negima!? gets licensed. would make sense to do so, but then ppl wouldnt get that its not based on the manga directly. its Neo Negima.