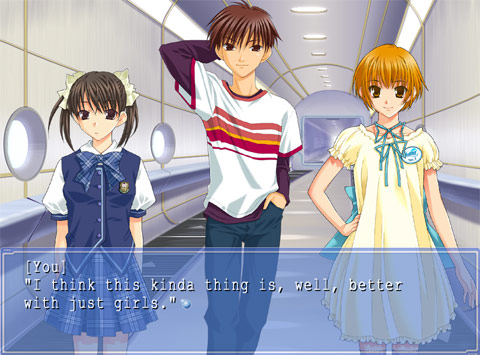 I love out of context quotes!

So as I mentioned briefly in the Anime Nano Podcast Episode #7, I’ve started to try out some visual novel games. These interactive visual novels are just as legitimate a part of Japanese culture as anime and manga. As such, I figured I should at least experience them a little bit.

When I received the game Ever17 in the mail, I figured I’d be able to get to the end of the game in an hour or so. After an hour, I found that I hadn’t gotten much plot at all. After talking to some folks in the Anime Nano IRC channel, I learned that this game in particular lasts about 15 or 20 hours the first time through! I had seriously underestimated these “games.”

At this point, I’ve gotten to the game’s “Day 2.” Unfortunately, the game doesn’t tell you how much real time you’ve spent playing it. I’d guess that I played for about 3 hours or so before reaching day 2. I’m not too sure how many total days there are in the game.

The game’s story up to day 2 has been somewhat generic. There’s the protagonist who can’t remember who he is, as well the little girl who keeps disappearing. The story is set in an underwater theme park where something goes wrong, and a bunch of people are stranded there. It isn’t the most interesting story, but I’m determined to make it through. I heard that the story gets really crazy later on, too.

One of my big complaints is that the game seems to be trying to stretch the story too much. For example, it feels like there’s way too much redundant description going on. What could be said in one sentence is stretched out to a paragraph. Then again, maybe that’s the point of the visual novel: to create a detailed storyline rather than rush through everything.

The voice acting seems to be very good. I should mention that it’s in the original Japanese language. That’s fine with me since I always listen to the Japanese voice track if I have a choice. Unfortunately, since I was kind of in a hurry, I skipped a lot of the voices by reading the text and then hitting “next.”

So after learning that this game actually has the advertised “100+ hours of gameplay,” am I a little discouraged? Yes. But I’m really determined to finish! Not only because it’ll mean that I level up as a weeaboo, but also because Hirameki International Group was kind enough to send it to me for review purposes. So yeah, I kind of need to finish it. Sorry Mom, it looks like I might need to take another semester of college after all!

For additional info on Ever17, you can visit Hirameki International Group’s Official Page. You can also download a free trial from Cnet.com.

15 replies on “My First Foray Into The World Of Visual Novels: Lessons Learned”

You should try School Days. It’s an excellent visual novel with real animation, at least in the early chapters. I strongly recommend it as a starter eroge.

100 hours??? I could never keep my interest in a game for that long… (Let’s see, if I played two hours a day on the weekends, that’s four hours a week, which means… oh god no…)

Protagonist without memory? Ah, you’re playing Kid’s route first. It really is going to be a bit confusing that way in my opinion, but I’m interested in what you think about going through his routes before Takeshi’s. Just remember that the objective is not to “get a girl”, but to figure out what the hell is going on.

And yes, that game will take a lot of time. I think it took me every night for a week or so to get through the game, and that’s with liberal usage of the “skip” option. Helpful hint though: one choice at the start of day one will determine who you play as, which determines the paths of the story that are available to you. You’ll know that you have made that choice once the dialog boxes are a consistent color.

And after Ever17, might I recommend Tsukihime. The English Patch should be coming out in around a few months, and it’s really, really good. (Warning: some sexx0r inside.)

Sorry Mom, it looks like I might need to take another semester of college after all! >>> be careful or u could start looking like a hikikomori =p

Go play Narcissu. At least, for a more “pure” look at the VN as a proof of concept.

Ever17 has easily some of the best plot twists and writing I have seen in a visual novel, and is prob far and away the best of the english translated novels/eroge. Even though the game doesnt tell you from the get go, you should start playing Takeshi’s route for the story to have the most coherence (after the prologue events, choose helping your friends over recovering your memory; kids route is purple outlkines I believe, and takeshi’s route is green outlines). When you get to the final ending, your mind will be blown away…I know mine was @[email protected] Still pondering the ending even now. Google for the walkthrough, its well worth it, since in visual novels, plot coherence is paramount over “winning” through picking choice x over choice y. Guarantee your enjoyment will not be spoiled thru its use =)

I really hope that Hirameki garners enough fundages and interest to import Never7 and other Kid games like Memories Off =).

From what I hear, the “true” scenario after you end all the scenarios in Ever17 has the greatest, yet most twisting storyline ever.

I’ve personally completed 3 of the Scenerios in Ever17, and since the game has no copyprotection of any kind I also forced the game on all of my friends. Saddly only 1 of them ever actually played it for more then an hour. And even he gave up not to far into it.

I really like this game, the 2 main characters you could control is an interesting idea. My favorite girl is Tsugumi, XD Not only do I think she’s hot, but I also think she has the best story of them all.

Also, Hirameki has stated that they’ll never be able to afford the rights to the bigger name titles, such as Tsukihime, Air, KANON, Shuffle, or any other’s that get turned into anime. The main reason being that there just isn’t the market for these games in the US. This makes me rather sad. T_T

XD Also speaking of Welcome to the NHK, they’r actually releasing a game based off of what he’s supposed to be designing. and all I can say about that is OMFG I need to learn Japanese NOW!

Any chance that a Mac version will be in the works?

Hi.
No, just the new (Animamundi) and later released games of Hirameki will run on Mac-OS.
However you could try bootcamp for windows.
Visual Novels are my whole hobby (like my website about it). If you have more questions, just ask.
Well, also good are Ai Yori Aoshi, Hourglass of Summer and Planetarian.

ever17 is a very good story you can download the demo at download.com have fun

Visual Novels are rubbish. They’re like books,except they never seem to have good stories and are badly written. They’re like comics, minus any clever narative structure.

It seems like if you’re a manga and/or anime fan, you have to pretend to like Visual Novels. Or perhaps try to stretch yourself into liking them because they are these “cool” Japanese thing.

The only reason they are liked must be simply because the people reading them must not have ever read a good book or comic before. I tried Visual Novels, I tried to see something good about them, but I couldn’t find anything.

Oh and one last thing, they ARE NOT games! Clicking on spacebar or on your mouse to go to the next page of text doesn’t make it a game.

I think you’re too rude about visual novels. You maybe didn’t try the right titles.
Some of them are really nice. Fate/Stay Night is an example. It’s fascinating, graphics are incredibly nice and the story captivating. If everyone is checking out these ‘games’ it’s only because a lot of animes are coming from them.

Well, my english is kind of bad.