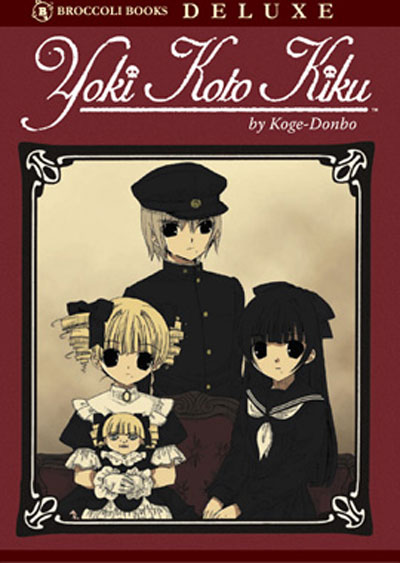 The patriarch of the Nekogami family has just died, so his inheritence is up for grabs. The oldest grandson is fighting in the war, and the other three grandtriplets are at home with his fiance/maid.

Each of the triplets has a dream that needs fulfilling and each of those dreams require lots of money. Koto’s dream is to find a cure for his illness, Kiku’s dream is to be discovered as a singer, and Yoki’s dream is a secret. Unfortunately, only one can have the inheritence.

What follows is a Battle Royale type fight among the siblings and the maid who is to become their older sister. The siblings are discrete, however, and only attack when there’s a good opening.

According to the translation notes, the story is actually a parody of an old Japanese mystery called “Inugami-ke no ichizoku.” It might be worth checking out if you want to get the whole joke, I guess.

While the setting is dark, Koge-Donbo can’t really help but draw cute characters. They look way serious on the cover, but once you flip through a few pages, they get XD and everything. I’m fine with that though. I love cute characters.

The humor (yes, this is a comedy) is mostly based on the macabre stuff juxtaposed by the cute images. For example, at one point Kiku reads the obituary section of the newspaper. We get to see cute little reenactments of “a double suicide of a mother and her daughter,” “a suicide pact between lovers,” and a “drunk man falling off a cliff.” They’re all really sad, but at the same time, really cute and funny.

The only complaint I had with the story is that it didn’t seem to have enough parts that were really funny. There were a few, but the manga seemed just a bit too inconsistent. It did have a lot of cuteness, which sorta redeems it.

The book itself looks really nice. I guess it should considering that it’s part of Broccoli Books’ Deluxe line of manga. I’m not exactly sure what the “Deluxe” means, but the manga has a nice matte cover and included a 1 page full-color insert. The print quality looked good throughout the manga too.

Yoki Koto Kiku doesn’t have a volume number, so I’m assuming it’s a one-shot manga. In the afterword, Koge-Donbo says she’d like to draw the characters again, so don’t rule out a sequel completely.

Another interesting thing about this manga is that from July to October 11th, this manga is only being sold at Borders. After that, it’ll be released everywhere. If you want it right now, I guess Borders is your only choice.

Overall, Yoki Koto Kiku is a solid one shot manga. It isn’t the funniest, but it does have tons of cuteness in Koge-Donbo fashion. I’d say it’s definitely worth getting if you’re a fan of her other works like Di Gi Charat, Pita Ten and Kamichama Karin, or if you a fan of dark humor.

Many thanks to Broccoli Books for providing me with a review copy of Yoki Koto Kiku. You can get more info on the manga at their official site.

I always wondered what the hell that was about
I saw an ad for it in the Kamichama Karin manga I bought but it seemed like they were all related so a chance of any kind of relationship seemed slim to none unless it was incest?? XD;

Picked up a copy of this 2 weeks ago from Borders. Crazy stuff I say! Can’t imagine Koge-donbo drawing manga with this theme. I think it’s funny, but as you said, not funny enough. Seems like bits and pieces put together.. the plot seems somewhat fell apart. Still, I wondered who would receive the inheritence after the end of the last chapter.

Although unofficial, KCK Chu Volume 1 will be released in September, according to amazon.co.jp — although not tentative, I believe it’s a good estimate. I’m definitely getting a copy.

Um, Well i own this book and I admit its funE and the characters are cute but they are kinda based off some of the characters in Kamichama Karin. Like Kiku looks like Karin and Koto looks like Kazune. Plus if u look at the release dates she made the book Yoki Koto Kiku the same month as book 4 of KK came out. And that was in 2004. She had a book preview for Kon Kon Kokon which didnt come out until the summer of 2007. So she had the idea that the book Kon Kon Kokon was going to be made before the end of the KK series because of how early the preview came out. If you want to talk to me about this just email me.