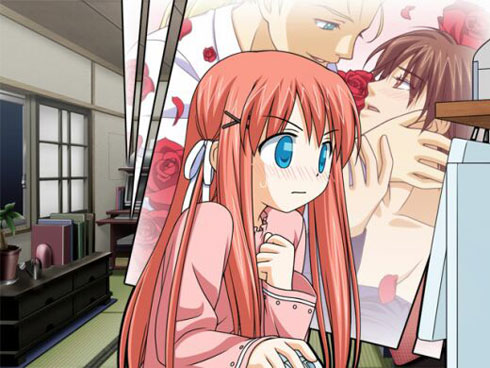 note: Danbooru is down, so I’m using this picture because it’s funny

Ah, two weeks have now passed since the release of my baby, Anime Nano, and I thought I’d give a quick update on its status and whatnot.

Lots more bugs have been squashed. The hardest one for me was the unicode disaster bug. Let’s just say that if you’re ever debugging something that’s being scheduled on cron, make sure the crontab has your environment paths set correctly. Whoops! That probably didn’t make sense to anyone…

Anime Nano now has its own IRC channel, thanks to that super hyper busybody, lolikitsune. I thought at first that using IRC to communicate was kind of analogous to using two cans and a piece of string, but I guess it’s not really that outdated, after all.

I drop by every so often to make sure they’re not taking the Anime Nano name in vain (or something), so yeah, join in on the fun. We’d love to see you there.

I made up an about page, just in case people are confused about Anime Nano’s true nature. It has a lotta text.

I also made up some link icons for Anime Nano. They come in three colors (including transparent!) and there’s also a mini (or should I say, nano?) one. So if you’d like to link to Anime Nano, but never thought you’d have the bandwidth to host such extravagant images, just use these!

We’re now indexing like, 60 anime blogs, up from the 41 a week ago. There are still quite a few I’d like to see added, though. I’m gonna stop being coy and just beg now:

These are the great ones that I could think of off the top of my head at 2:30AM. My brain isn’t working at 100% right now. No offense meant to thost that aren’t on this list.

If there’s an anime blog you don’t see here that you’d like to see on Anime Nano, you can leave a comment or contact the author yourself. Hey, wait a minute, that’s a good idea. Maybe I should’ve done that instead of publicly prostrating myself. It woulda been a lot more direct…

Anyway, that’s basically all that’s happened in Anime Nano news, so until next time, keep the site suggestions and comments coming!

14 replies on “Anime Nano Update: The State of The Nano”

I don’t see Lolitron either.

By the way, Hung, your link to me doesn’t work. People might be confused by that.

I’m also missing lolitron, and I’d like to second Anime on my Mind, and Random Curiosity. They’re all great sites though, and as far as I can tell, everyone benefits from being on as many aggregators as possible. More choices=win.
So please, all of you, if you’re reading this, please add yourselves to anime nano. And anyone out there who’s not in, join, it’s a great site.

Everyone is required at some point to use that picture, and every time someone does, it gets funnier.

Hmm, Unknighted Manganime, Phoenix512’s Anime Blog, Anime Field, Wakaranai, Blogging WitÂ´KT and Hashihime are still missing as well. IÂ´m also hoping for Mina to apply, when she manages to get back.

Hmm, I don’t see irony you speak of, DrmChsr0.

Emphasis on the word MORE.

That is most probably unintentional, but I find it hilarious.

Why don’t you add them yourself? Create an admin account for yourself to add blog RSS by yourself. Afterall RSS is just a free for all feed submission.

WTF, mate?! So, I feel like I’ve been *virtually* dead for about a month (pun intended). Who knew I would miss out on so much? Anime Nano? Â¿Que?

Hung, this is an AWESOME idea, and I love the indexer! I can tell you must’ve put a lot of hard work into it. I also love the design and organization. Geez! Of course I would like to be included! I am kind of unsure how I submit myself, though…-,- I guess I will go look that up right now.

Anyway, best picture evar. I was so happy when I found a chance to debut it, haha. I had it uploaded to my server long before I even had an excuse to post it.