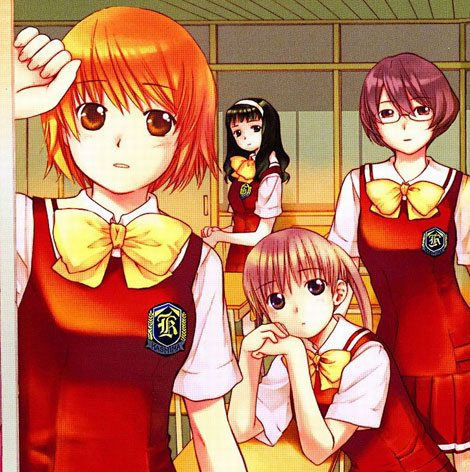 While watching Kashimashi, I noticed that the ED song kept changing. At the time, I thought “wow, this song is really good, plus they have a billion versions of it!” It turns out that episodes 8-11 of the anime all have different seiyuu singing it! The different characters all have unique lyrics so the song fits their character too. Are you thinking what I’m thinking? Yep, it’s time for a Seiyuu Showdown: Karaoke Battle!

Masumi Asano is the voice actress for Ayuki. She gets to sing first on the ED for episode 8 of the anime. I dunno if she’s trying to sing it like the character would, or if that’s how she would sing it in real life. Either way, her voice is kinda weak, and she really struggles in some spots. Still, she puts a lot of feeling into it, so I’ll give her points for that.

Next up is Kana Ueda on the ED for episode 9 of the anime. She’s the seiyuu for Hazumu. Her version is kinda bland. She doesn’t sound bad, but put some emotion into it, girl! She does get some cool acoustic guitar at the beginning, but I’d still say this version is average in comparison to the others.

On the episode 10 ED is everyone’s favorite, Yui Horie! She does the voice of resident emo, Yasuna. Her version is cuter than the Ayuki and Hazumu versions. The background music also gets updated kind of annoyingly. There also some weird audio effects that I don’t approve of. I do like the use of the acoustic guitar, though. Plus it’s Yui Horie! I’d say this one is average, too.

Last, but not least, is the Tomari version of Michishirube. Her version gets even more remixing. Weirdly enough, Tomari is supposed to be a tomboy, but her version sounds the cutest. I think I like this version the most (besides the original one). I like how she holds out “truth” longer when she sings “looking for the truth.” Plus, she doesn’t pronounce it like “truce!”

Also, here’s the original version for comparison. I actually don’t like how she cuts off notes, but she’s still the best singer:
Listen to Michishirube – Yuumao.

I think Tomari wins it, though Ayuki’s is more raw (which is good), and Yasuna’s is not bad either. Oh noes, I can’t choose, just like Hazumu in the anime!

I completly agree with you, the first time I notices they keep changing the person sing the song, I was like, this is great!!

I also love the ep 11 song by Yukari Tamura, and I agree that she sounds the cutest. That could also be because I always cheers for Tomari, in the anime and manga.

I still holding out for hopes of a 2nd season, but I am not too sure about the whole lifeforce thingy the manga is heading.

You’re right, Tomari wins. I have a certain respect for seiyuu who work hard to overcome English pronounciation.

Could you do a similar article for Pani Poni too? That would be a lot more interesting. And since most of the above star in it too.

But the above have done a tonne of OPs and EDs on their own, so I’m sure they each are pretty good in their own sense. Ueda Kana seems to be best when she’s acting all cute and Kansai, while Tamura Yukari is best at her Ranpha role. The zany man crazy whiny girl.

Yeah, Tomarin’s version definitely wins for me. Her image song from the chara album was also the best IMO. I don’t know why Masumin’s singing on Michishirube was so weak, she doesn’t normally sing like that. I only wish there was a Janpoo version as well, her image song was so much fun!

first, where can i find torrent for the character album?

Tomari is my favorite character, and so is her ED.

Well Tomari’s version was definitely made so well…
The music is so mild and calm especially when the chorus approaches and then there are like bells inserted.
I really love her version! Haha!
I like the voice actress too!
Too bad Hazumu and Ayuki’s music version weren’t edited instead it was just taken from the original Michishirube…
Unlike Tomari and Yasuna’s which were edited to sound really great. Hahah!

By the way, I was supposed to share the album but then my hard drive was carelessly formatted by my father so my efforts in looking for Norte Amour album were totally wasted…
I even don’t know where I found it anymore.
Anyone can help?