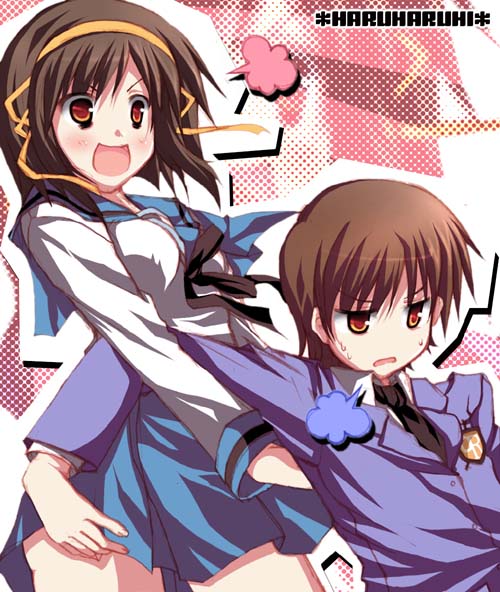 Okay, I think I used the word “Haruhi” enough in the title to get your attention.

This Spring Anime season has been pretty darn good. At the top of the heap (for me) are two anime starring girls named “Haruhi.” There’s The Melancholy of Haruhi Suzumiya, and Ouran Host Club.

The eternally raging debate in my mind at the moment: which Haruhi is the better of the two? Certainly they both have their good points. Let’s do some analysis, AoMM style:

Suzumiya Haruhi is an archetype tsunderekko. Sure, she’s manipulative and bossy and when she gets bored the world ends, but that smile at the end of the day (almost) makes it worthwhile.

Fujioka Haruhi, on the other hand, is a nerd (+ points for me, I dunno about you). She’s pretty laid back considering he’s surrounded by hawt guys all the time. I’d label her as the kakkoii-type.
Edge: Fujioka

Suzumiya Haruhi has countless hairstyles, and she changes it everyday. Or at least she used to. I’m partial to the buns; it’s too bad she doesn’t wear those anymore… 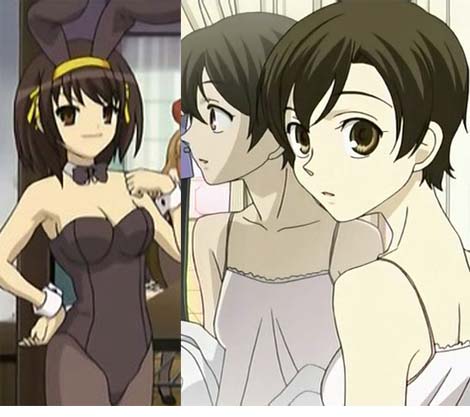 Wow, it’s pretty much a tie (okay, so I tried skewing things to make for a better poll). Who do you think is the better Haruhi? Suzumiya or Fujioka? Vote, and be heard!

Well, i vote for fujioka-sama

Fujioka Haruhi !!!! first of all Haruhi Suzumiya is a retard so i can see he just dominates people with no sense of respect to others her only advantage that he got is his Godliness and C-cup Boobs?. While Fujioka is a person who respect his senpai and willing to pay his debt and doesn’t mind what people calls him a boy or a girl. Poor SOS being dominated by a slut who likes to let them wear bunny suits and let them juggle their boobs.

Fujioka Haruhi. I dislike tsunderes. Not sure why, but I find them to be too much. Way too much. Fujioka Haruhi on the other hand, literally pwns shoujo stereotypes. She’s got common sense. When was the last time somebody had common sense? Not only that, she’s sarcastic, honest, collected, hard-working, natural, confident, intelligent, and kind. But mostly, I like her for her relatability and realism. She’s not in your face or violent, but she’s legitly grounded and aware of who she is, on top of having a sweet, genuine charm about her. Gender nor looks matter with Ouran’s Haruhi. She’s amazing because of who she is on the inside. 🙂

fujioka for the win