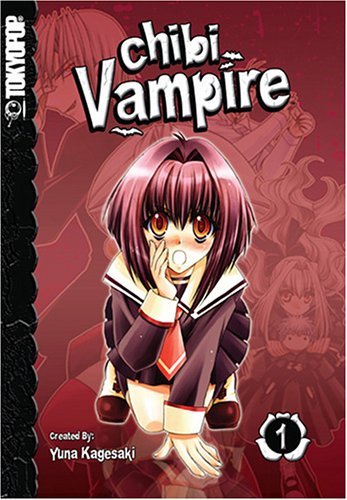 I was minding my own business at ANN, when I saw a review for a manga called “Chibi Vampire.” But wait, the girl on the cover looks exactly like Karin! Could this be a Karin knockoff!? Upon closer inspection, it appeared that Chibi Vampire is the North American name that Tokyopop has given Karin.

I believe that the rationale behind this name was to actually describe what the manga was about. “Karin” doesn’t really tell you a whole lot about the story… That said, I’m still not sure the move was a good idea.

I usually hate attempts by companies to localize Japanese imports; they usually end up sounding weird anyway. I was under the impression that “chibi” usually describes the art style of a manga or anime. If that’s the case, Karin is most definitely not chibi. I think a good example of chibi would be Dejiko from Digi-Charat. Maybe the chibi is supposed to describe Karin’s age, but I don’t buy that.

So I see a few things wrong with this naming convention:

It’s really a tricky thing, localization, and I could probably write about it ad infinitum. Title-changing, subtitles, translation and dubbing are all pretty loaded topics. But I wanna know what you think! Is sticking to the source material most important, or are there things you can get away with in the name of translation? Vote in the poll, leave a comment, or even discuss in the forum! (Yessss!!! A plug for the forum!)

Well, in addition to being the style of SD, isn’t chibi “small”? A fairly reliable dictionary I know of says “runt, shrimp, dwarf.” I can definitely see Karin being described as a runt vampire. Doesn’t that make sense?

Tokyopop said that the reason for the name change is that they already have a manga named “Kamichama Karin” and I think that they said that another publisher also had one with some derivative of “Karin” in it.

A better title for the Karin manga (besides Karin itself) would be Misfit Vampire since it would better fit Karin herself than Chibi Vampire.

I saw this at the bookstore the other day. I agree with Phoenix512, “Misfit Vampire” does sound much more fitting for this title. But getting past the title change, Why the heck did Tokyopop flip the cover? The Manga is still japanese style, right to left. But the cover is on the wrong side as if it were an american book. O_o;

Hmm, I haven’t seen the book in person, just online, so I didn’t notice the flipped cover. Misfit Vampire does sound pretty fitting for the manga. Or at least prepend the title with “Karin: Chibi Vampire” at least. I’m glad that I’m not the only one confused by the title.

Karin is definately not small, as she is about half a head shorter than Usui. And Usui looks relatively lean and tall.

yupyup I agree with everone else.
I couldn’t believe they would do that!
I love Karin, shes my fav. character & outcast.
I think that they should have put sumthing like what Phoenix512 said, “Misfit Vampire” cuz it sounds better, well waaaaaaaay better than “chibi vampire”… I’m still going under the process of understanding that (O_O)

well chibi is a type of manga art style where the designs and characters proportions are srunken down, to a small and even size….but the art for chibi vampire…is definatly not chibi! da cover dilemma thing confused me 2!! all in all…great story thou!!

Hey i really love thia manga. it was a anime first right? i just really love it its soo cute and stuff. I like the novel more than the manga but thats ok. Karin is the best in her family lol

This has got to be one of the best mangas I’ve ever read, and I have read alot. Also, I believe that this is one of the best, if not the best, anime series ever because it doesn’t rely on blood and sword slashing brawling and grueling things like most of the popular animes do. I just believe if all animes incorporate alot of the emotions given off from this ones, than maybe they would be alot better than they were.

Well, Karin IS 4ft, 11in.
But I think the reason why the name is Chibi Vampire for the reason that, she’s no much of a vampire. o.o
She’s clumsy, kinda shy and just….spazzy. @[email protected] Basically.
Chibi does mean small but it could be directed in a different way.
Or maybe I’m reading too much into it.
Nevertheless, Karin is cute. Chibi is ALWAYS cute. It FITS her.
=]
She’s the little Vampire.
I think that’s what their getting that at.

how about karin the blood making vampire?

Well I Personal think “Misfit Vampire Karin” would be the best title… Because I was looking for it… But naming it “Chibi Vampire” their is just too many things wrong with that to complain about. But since their are other manga out there with the name it would narrow it down. But don’t just find a cute japanese word and put it in the title. It’s just annoying. And is the cover really on the wrong side?!

In the manga, it is stated that she is 4′ 11″, so she is quite small. Also, you have to take into consideration that the main purpose of the title is to get people to buy it, and “misfit vampire”, while much more accurate, just doesn’t have the same kind of pull as “chibi vampire”.

I’m not usually one to comment on sites like this but… I just read this and according to wiki chibi also means “small child”. http://en.wikipedia.org/wiki/Chibi_(Japanese_term) -my source

Anyway, I thought it might be referring to how Karin acts, she’s innocent like a ‘small child’ and acts younger than she is. Then again they could have just picked a japanese word people thought was cute; I just thought it was a cute title because Chibi drawings are cute!

I read somewhere that Chibi Vampire, the manga, was made before the anime, Karin,like most mangas and animes. I think Chibi Vampire was given the name Karin when I was turned into a anime. Or TokyoPop could have given it the name Chibi Vampire because American manga companies sometimes change the name of manga so that there is a certain series or no confusion on the plot or story. A good example is one of my favorite manga/anime, YuGiOh. It’s Millennium World series in the english version says on the third page (I have the book with me now):
‘In the original Japanese edition, YUGIOH! and YUGIOH!: MILLENNNIUM WORLD are known collectively as YUGIOH!. The English YUGIOH!: MILLENNIUM WOLRD was originally volumes 32-38 of the Japanese YUGIOH!.’
Also the name Karin could have been changed because the reader can easily tell what its reading by the name Chibi Vampire, for people who didn’t know about Karin until reading it, Karin could really be anything. Or the manga’s name could have orginally been Chibi Vampire and changed it Karin when it was animated. I’m not 100% accurate this is just a guess or a sugestion.

Origanly it was Karin in jap, but since tokyopop had Kamichama Karin (another manga) so they named it Chibi Vampire. The manga was befor the anime, and has a toadly different story. As for why they called the anime Karin, I don’t know. I’ve watched the anime once and read the books twice, so I think I know.

you right chibi vampire is a japanese manga series written and illustrated by Yuna Kagesaki its about the unusual vampire girl, who instead of drinking blood must inject it into others because she produces too much

I was searching for this manga and i finally found it. Thank God google exist.
I was kinda dissapointed when i noticed the anime series did only have 24 episodes, i watched the whole series in 5 days and i cried a lot.
It’s really the best anime series and the best manga i’ve ever seen/read.(even though i did just only read volume 1 and 2)
I Cried a lot at the anime series, the expressions and feelings were just flowing out of my laptop screen.

And i felt so fooled at the last episode.
i was crying almost the whole episode, and cried my heart out when Carrera/Calera ‘died’
She was my favorite character and i felt so fooled when they all just got up and ren was just angry about his clothes.