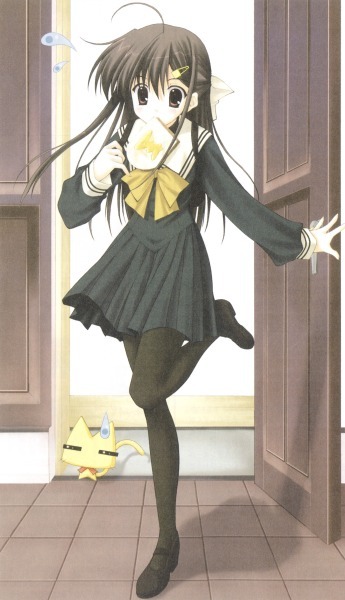 Man, I have no time anymore! What with me getting ready for school, putting on shoes, and having toast in my mouth all the time like a good student…

Here’s a few quick impressions on the anime I’ve watched so far this season, and I’ll put full things when I have time:

Gakuen Heaven:
This is a really gay show. Not that there’s anything wrong with that… Actually, the show is just bad. Forget the whole premise. Replace the guys with girls, and the show would still be bad to me. On second thought… I did like Strawberry Panic…

Utawarerumono:
This show has a masked amnesiac guy stuck in a villiage in peril. And a cute cute dog-eared girl! The animation looks really good (dog girl is really really cute!) so I might keep watching this. I noticed some totally inappropriate CG right at the end for the wolf. I have no idea why they put that in. OP and ED sound pretty good.

NANA:
This one is pretty cool looking. Punk Nana is cool, and other Nana is cute! With their powers combined, they form Captain N(ana)! The animation is cool, especially when Nana gets SDified. I’ll keep watching this anime.

Air Gear:
I’m split on this anime. On one hand, the characters look really cool (the girl ones). Meganekko is especially cute! On the other hand, it’s just so stupid! The dialogue is dumb, and the premise is also just mind numbing! But pretty girls! Really, I’m torn here like Natalie Imbruglia

Ouran Host Club:
This is an awesome anime. Perhaps the anime of the season. The characters are interesting; the animation looks great. They really did a good job adapting this anime from the manga. I like this show a lot. I might just buy the manga too. And yeah, it’s labeled shoujo, but I think it’s an “anyone” anime.

Disgaea:
Hmm… I dunno. I’m kinda scared that the story has been totally changed from the game (and the promo!). Still, the characters are nice and chibi, and the voicework was good. I’ll keep watching this anime anyway, since I’m a major fanboy.

xxxHOLiC:
This one looks really cool too. I think the characters are suffering from super long extremities (not THAT extremity; arms and legs!), but other than that, they look good. The premise is pretty wacky, but already I’m interested in the story. Hopefully the anime doesn’t become all about the little black rabbit thing. In other news, does every anime NEED to have a lesbian vibe? I think so!

cool with all the new anime out, i’ll know which ones to check out first. thanks to ur quick review

I don’t think there is anything wrong with all anime havnig a lesbian vibe….do u?