So I haven’t really been watching much anime since starting grad school, but I latched onto Minami-ke a few weeks ago and I’ve been watching it whenever I have free time.

I’m about four episodes into the second season, Okawari, and I have to say, the series seriously jumped the shark transitioning seasons (and apparently directors). 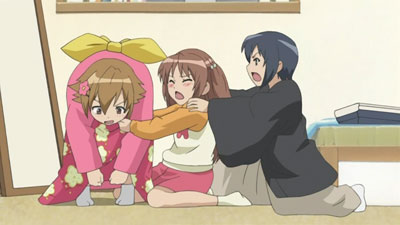 Note: trying to stop a crossdressing guy from removing his panties: funny

The first season was a nearly perfect slice-of-life + weirdness anime. Kind of like Azumanga off of the crack. We had some cross-dressers and weird shirtless stalkers, but besides that, things were cool. 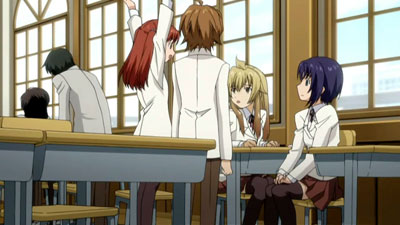 Note: Creepy students in blackface looming in the background: not funny

But the second season just doesn’t do it for me. The direction is horrible. The stories are boring. The Bible Black faces are completely misused. And the blackface that all of the supporting characters wear is just kind of unnerving. Am I watching an anime or an h-game? Also, what happened to Sensei + Ninomiya-kun? It was the best show within a show since Binkan Salaryman! And the ultimate harbinger of shark-jumping has arrived: a new character! Things do not look good for the Minami sisters…

I’m going to keep watching since the first season was so awesome, but if things don’t shape up soon, I’m going to have to refuse this second helping.