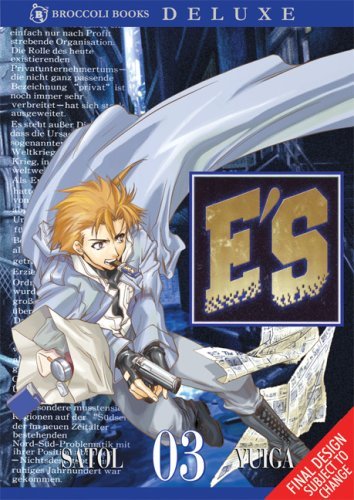 Book Blurb:
Kai wakes up from his ordeal in an underground labyrinth, and is led by a mysterious voice to a place where young psychics are being held captive.

Meanwhile, Yuuki confronts Maria, who demands he hand over the psychic he is harboring, but she doesnâ€™t mean Kai!

Yuuki soon learns that thereâ€™s a bounty on his head, and he must hurry to find out the details before itâ€™s too late for both him and Asuka.

Analysis:
Seriously, I don’t remember stuff like Kai teleporting anywhere at all. The other stuff that happens in the volume sort of makes sense, but I’m still struggling to put everything together. It seems to me like Broccoli is releasing a lot of stuff that’s critically acclaimed, but is very hard on the brain (like Kamui and E’S).

To make matters worse, only about half of this book contains story from the current plot. There’s also two chapters of “Prelude to Destruction,” a promotional manga that was created to drum up excitement about the real E’S manga. Prelude increases the nonsensical factor since the characters are all different from the E’S characters (though the names are the same). For some reason, Asuka has psychic powers in Prelude. Maybe it’s a hint that she’ll have them in E’S? Or just a fluke of random character design?

Conclusion:
Here’s the bottom line: I’ve read three volumes of E’S, and I really don’t have any interest in the characters or the plot. Sure, Asuka is pretty darn cute, but I don’t care about the mysteries of Ashurum or Kai’s sister. I have basically zero emotional attachment to the characters. What does this mean? E’S is crazy boring to read for me.

Many thanks to Broccoli Books for sending me a review copy of E’S Volume 3!

Does this have any relationship to E’S Otherwise? I never did finish watching that anime. Did it ever complete?