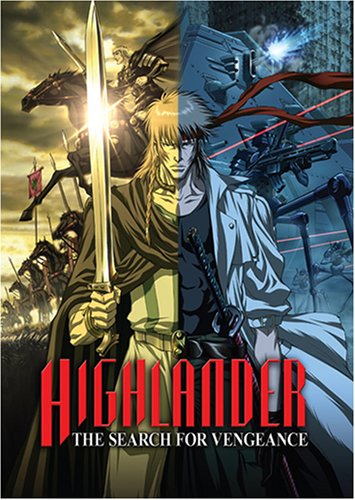 To be honest, I don’t have much experience watching Highlander stuff. I think I may have seen part of a movie, and maybe an episode of the TV show. The OP totally rocked! Anyway, I just got this anime version in the mail so I figured I’d pop it in my DVD player and check it out.

Story:
Highlander: The Search for Vengeance follows the story of Colin MacLeod and his never ending search for… you guessed it: vengeance! Apparently Marcus Octavius was an immortal, and he killed Colin’s wife and destroyed his town in the name of Rome!

Colin has been following Marcus around ever since, trying to get his revenge. After 2000 years, Colin still hasn’t gotten the best of Marcus! Now in the present, (it’s like the 22nd century), Marcus has taken over New York City! Can Colin finally get his revenge? I’d sure hope so by now…

Analysis:
This anime tries really hard to be cool. In some cases it succeeds, and in others, it ends up being really funny. There’s a funny anime-esque scene where Colin is fighting another immortal. He does one of those slashes that’s so fast, that his opponent laughs at him, then a few seconds later his head slides off! While I admit that’s kinda neat, it’s also very cliche and I sorta saw it coming from a mile away.

Right after that scene, we see Marcus wailing on a guitar hard. It’s almost like an excerpt from Robert Hamburger’s Real Ultimate Power. You know, with the ninjas vs pirates? The sense I get is that the writers are exactly like the fictional Mr. Hamburger. They’re writing this stuff thinking it’s totally badass, when really it’s roll-on-the-floor funny! Not that there’s anything wrong with that.

In fact, I quite enjoyed watching this anime. I decided it was one of those times that I should just shut down my brain and enjoy. Still, there were a few things that kept nagging at me. For instance, right before Colin’s wife dies, she asks him to promise that he won’t try and get revenge, saying that it’ll totally ruin his life. Colin replies, “I promise…” Then his wife dies and he continues “…that I’ll get my revenge!!!” It’s really funny and unintentionally so. But funny nonetheless.

Also, I love how Colin finds out that his wife’s spirit has really been living on in other women. Then he finds out that his wife is currently a prostitute… Umm… well at least she lives on… Later there’s a totally uncomfortable sex scene with nipples and all. I’m sure quite a few people will be watching this anime with their “non anime friends” and once this scene pops up, instant awkwardness!

Character Designs and Art:
The Highlander concept is American, but apparently the director (Kawajiri Yoshiaki) is Japanese and animation studio (Imagi) is from Hong Kong. The character designs are more towards the “realistic” side. They’re alright, I guess.

The animation is OVA quality. I guess this could be considered an OVA, after all. There’s quite a bit of CG used, but it’s mostly in good taste.

The Actual DVD:
I realized that Highlander wasn’t an original Japanese anime creation when I went to the audio menu of the DVD to change the language, as I pretty much do automatically now. That’s okay though, the voice acting was actually pretty good. There were a few times where Colin totally sounded like he was trying to be Snake from Metal Gear Solid. That got a bit annoying.

There were a few extras on the production of the anime that were interesting, including an interview with the director, Kawajiri Yoshiaki. It has some nice background if you’re trying to figure out if the DVD is really anime or not.

Conclusion:
The Highlander anime is an interesting project. There’s people of all sorts of nationalities working behind it. I think the result can still be called anime, even if it was created for American audiences. It’s a pretty enjoyable movie, both for the intended coolness and the unintended hilarity. Sure, it’s kinda cheesy, but in the end, it’s enjoyable cheese.

Many thanks to Manga Entertainment for sending me a review copy of Highlander: The Search for Vengeance.

7 replies on “Highlander: The Search for Vengeance – Anime DVD Review”

Yeah! That’s the OP I was talking about!

I remember seeing this in Newtype USA, but the art didn’t apeal to me. You make it sound like the show I was expecting it to be. xD

I found the film to be enjoyable cheese too – like you I don’t remember much about the original movies beyond the fact that they were entertaining and that McLeod is a badass.

The action’s great though – Kawajiri brings a lot of the slick animation techniques and gore from his experiences with Ninja Scroll and Vampire Hunter D: Bloodlust, which is no bad thing. Still, there were moments where it was laugh-out-loud funny: for instance there was a scene in which several clearly Scottish characters were gathered together over an on-screen caption that stated they were in ‘Northern England’. You’re only a couple of hundred miles out, guys…

Definitely fun to watch but I don’t know if I can be bothered to go out of my way to see it again. THERE CAN BE ONLY ONE! 🙂

Thanks for the review, I’ve been waiting for this. Love the original movie, which is classic.

This movie is so bad that it actually puts Highlander 2 to shame.