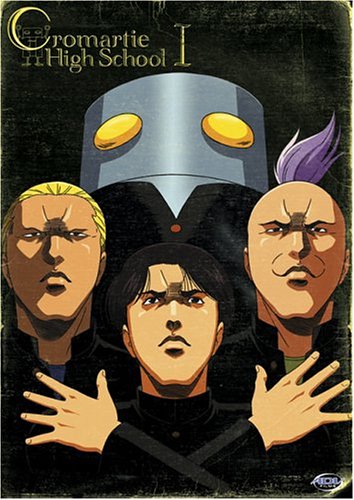 Story:
Like many random anime, Cromartie High School doesn’t have much of a story, per se. The main idea is that Kamiyama, a normal high school student, has enrolled at Cromartie High School. Cromartie is known for having the baddest delinquents around. Somehow, Kamiyama is accepted into their group, and joins in on their delinquent adventures.

Cromartie doesn’t just have badasses, though. It has robots, gorillas, and even Freddie Mercury on a horse. Most of the plotlines have to do with Kamiyama exploring the weirdness of the school, or fighting delinquents from rival schools, or doing random stuff for no reason.

Analysis:
Despite the randomness, Cromartie is insanely funny. There’s one episode devoted to Kamiyama trying to figure the name of a song that he has stuck in his head. So he hums it to the entire school. And the entire school hums it back, eventually forming a choir. It really shouldn’t be that funny, but it is.

Of course, some of the jokes do falter, but I blame it on the unique Japanese culture that the anime is based on. There’s also a show within the show called Poo-tan that’s funny in its unfunnyness. It’s all really meta, but entertaining nonetheless.

Character Designs and Art:
Didn’t I mention that this anime includes Freddie Mercury? I don’t think I need to say anymore about character designs.

The animation is really cheap. A lot of the times the characters are thinking, and it’s just a still shot. Or they’re humming in the case of Episode 3, and only their noses move. They still manage to get a laugh out of it, as one of the characters realizes outloud that while the show is an anime, almost no movement has occured!

The Actual DVD:
The DVD is done surprisingly well. This is the normal DVD, and not the thinpak, so who knows, things might’ve changed with that. I got the box set, which came with a volume of the Cromartie manga as well. Maybe I’ll review that seperately.

As far as extras, the DVD contains most of the extras that I never care about (OP, ED, previews) and a few that I do care about! The most notable is the inclusion of some Japanese cultural notes. These really helped out, explaining a lot of the random humor and puns. I think every anime DVD should have cultural notes.

Conclusion:
If you like random gag anime, Cromartie High School is a really good choice. The episodes are nice and short, which help out my crazy short attention span. Plus the DVD is cheap in thinpak now, and it’s a really good quality production.

I bought the DVDs seperately, but if you’re gonna buy it, it would probably make more sense to just get the thinpack in one go.

I don’t know if its just me, but I find the dub much more enjoyable. I blame my american upbringing, but I guess it can go both ways depending on which culture you’re more familiar with.

I just tried out the English dub. It’s actually decent (I like the voice actor for Kamiyama) but I still like the Japanese dub better.