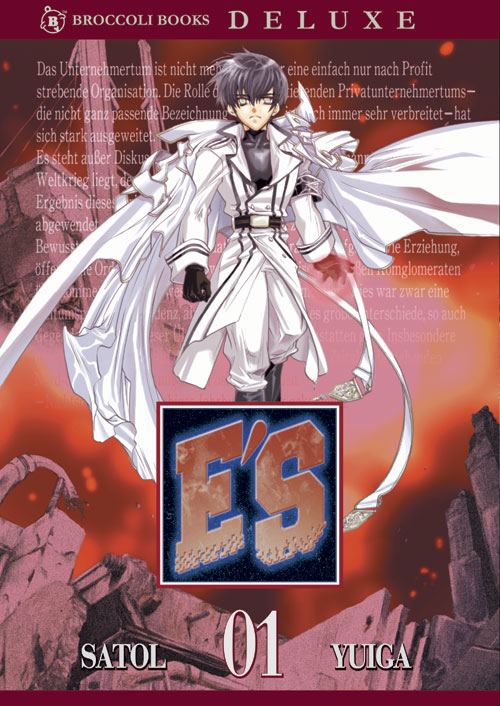 Years upon years ago, when I had just started watching anime, I come across a series called “E’S Otherwise.” I think I only saw the first episode, and then it happened to get licensed by ADV. Apparently the E’s manga is incredibly popular in Japan. Broccoli Books recently released the first volume for English consumption. Let’s see if I remember anything from the anime…

Story:
After another world war, the countries of the nation have disbanded, and corporations rule everything. It’s also about this time that people start getting psychic powers! These powers range from teleportation to flying to energy blasts. As is typically the case with psychics in society, normal humans start to hate on them.

Kai Kudou is a fledgling member of “Ashurum,” which is some kind of psychic protection agency. Their job is to “help” psychics who are acting as criminals. The members of the attack force for Ashurum are psychics themselves, too. Just like the X-Men! There’s something fishy about, Ashurum, however. They’ve pretty much got his little sister as ransom in their hospital, so Kai can’t really help but do what they tell him to.

On his first team mission, Kai goes out of his way to save a little girl. Instead of thanking him, the parents kill his team mate and start shooting Kai! He fights back, though, ripping the girl’s mom into pieces… Whoa, this manga is really violent! Later, Kai gets into a fight with his rival Shen-Long, and ends up getting blasted away. He’s rescued by a girl named Asuka.

Analysis:
I think this is probably the most mature manga that Broccoli Books has released so far. Sure, Kamui has incest and slicing and whatnot, but E’S has mom ripping! It’s actually a very interesting story since there’s so many aspects to it. Kai has to come to terms with the fact that he’s hated by people just for being a psychic. The fact that he totally rips up the humans that attacked him don’t really help his case, either. There’s also Shen-Long, who hates all humans just like the humans hate all psychics.

I really can’t help but think of X-Men when I think about this manga. There really are a lot of parallels, not in the super hero aspect, but in the storylines in terms of racial and social strife. E’S seems to be a bit more mature though, skipping on the ridiculous costumes and mutant powers, just focusing on the story.

Character Designs and Art:
The character designs in E’S seem a bit generic and maybe dated. The manga actually started in 1997, so it’s almost 10 years old. There’s not really anything wrong with the art; it just feels like I’m reading an old manga.

As expected from an action manga, there’s a lot of panels with just explosions and whatnot. I always find these ones hard to read. It might just be my inexperience reading manga, but I find that without the contrast of color, these panels are sort of an eyesore.

The Actual Book:
E’S Volume 1 uses the newer style of printing books that Broccoli Books also used in Kamui Volume 5. I actually emailed the managing editor, Shizuki Yamashita about it. She told me that previously they used 70lbs vellum, but now they use 70lbs off-set. Whatever the process is, the pages feel a lot less stiff and it makes for easier reading! Plus the pages are also nice and white!

One thing I noticed about E’S Volume 1 is that there are a ton of extras. Like at the end there’s a short “Aftertalk Manga” about the making of E’S, then there’s a character relation chart, character profiles, a guide to Gald (the city in which the first volume takes place), an analysis of the character’s names (and what the kanji mean) and a preview of the next volume! They seriously put a lot of work into this book!

Conclusion:
I really liked E’S for a number of reasons. It was easy to understand, it had plenty of action, and the plot was interesting. I’d highly recommend E’S if you’re into more mature action manga. This manga is rated for 16+, so get ready for a lot of flying guts!

Many thanks to Broccoli Books for supplying me with a review copy of E’S Volume 1. You can visit them at Broccoli Books or learn more about E’S here.

I remmeber the anime E’s Otherwise and the whole I was hoping Asuka would get with that guy but I dont think they ever really got together.I was so disappointed

Haha, I know what you mean. I was hoping that they’ll get together as well but this anime is totally lacking in the romance department. Nevertheless, I still found it quite enjoyable.