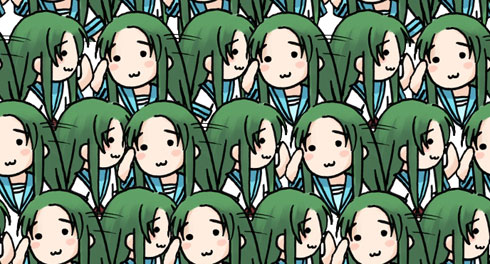 This is my new desktop wallpaper!

To me, a lot of what makes anime unique is the facial expressions that characters use. I’m kind of a sucker for these, and any anime that (over)uses them will usually get my vote. I thought it’d be fun to use the Summer 2006 anime as a case test for these expressions. 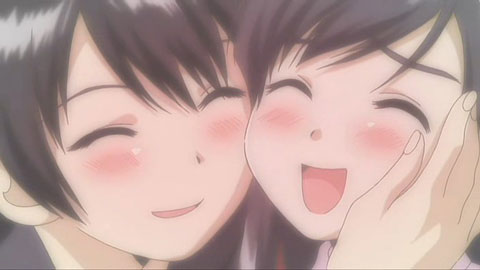 Okay, so maybe the blush isn’t so much an anime facial expression as it is an add-on. Blushing just makes a cute girl (or boy, I guess…) cuter! I’ve noticed this a lot recently while watching anime. I seriously can’t get enough of it! I especially like the squiggly line one. 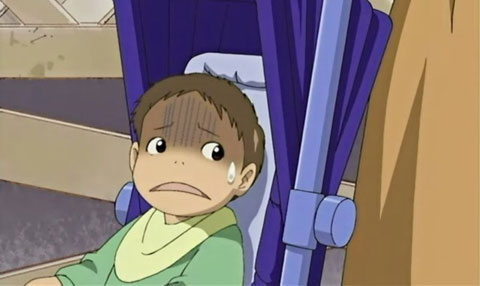 It always used to confuse me that anime characters would have only one gigantic pore that would create a big ball of sweat on their heads. Now the sweatdrop is like second nature! This technique is used to show that a character is silently startled or worried about something. Apparently in anime, even inanimate objects can sweat. 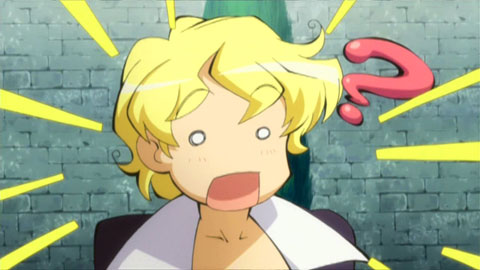 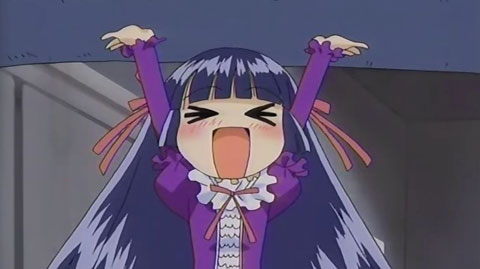 XD is one of my favorite expressions ever. If you can’t see it, the ‘X’ is the squinty eyes and the ‘D’ is the mouth. I really don’t know why I like it so much, but any anime using this expression will likely be watched by me. XD is good for showing either extreme happiness, or annoyance. 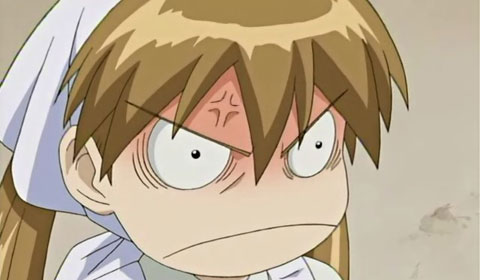 Whoa, it’s an expression that people use in real life! The popped vein is just an exaggerated version of the real life counterpart. There’s not much to say about it; it’s pretty kawaikunai… But still funny. 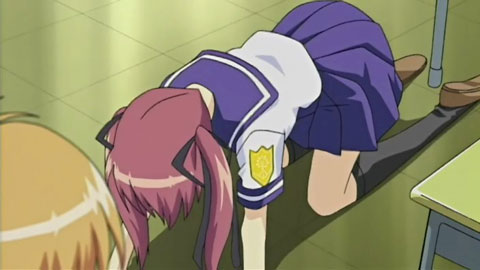 What anime expression list would be complete without orz? Orz is a way for characters to show complete and utter defeat. I’ve always wanted to try this one in real life. Fortunately, I’ve never had the chance… 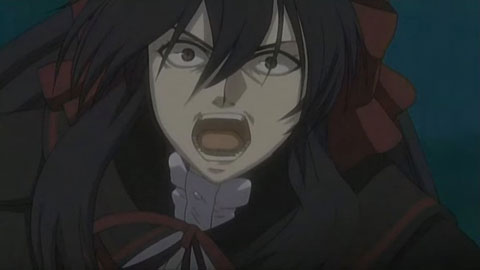 The Emotional Facial Contortion is a (thankfully) rare anime technique. It’s used to show surprise or anger in a dramatic (non-funny) way. Among the Summer anime, I’ve only seen it used in Coyote Ragtime Show. Hopefully it’ll be limited to that.

There’s a bunch of other expressions I haven’t included that I didn’t see in the Summer anime. This includes :3, 3_3, and probably a bunch of others I’m forgetting. I’ll probably cover these sometime in the future.

wow im such a moron so thats what orz is. i always looked at it from the japanese character version so the “orz” never meant anything to me lmao 8D

Yeah, I didn’t quite know why it was being called a wall paper until I noticed it was a tessellation. Pretty awesome, huh?

Also, that is my current wallpaper – awesome ^_^

awesome wallpaper
where do you find these wallies? they’re great!

Good article but what’s up with flowers growing out of people’s heads? I keep coming across it, and have no idea what it’s supposed to convey…

[…] I love how meaning can be conveyed without speaking. I also love how drawn characters can be more believable and truthful than standard actors. […]

I luv this one lol

P.S. my e-mail is [email protected] anybody is welcome to respond I’m a decent artist

very interesting, but I don’t agree with you
Idetrorce

Niiice, thank you.
I needed expressions for my anime report for school.

What about the exasperated mushroom coming out of the mouth?

It’s called a mushroom cloud. It’s when someone sighs.

However you missed the no-eyes face, you know when characters are extremely dramatic and suddenly their eyes disappear because it is a sad scene.

Who IS that adorable blondie with the beady eyes?? I must watch whatever anime he is in!

You also forgot the one where their eyes go rectangular, seen commonly in Naruto

Dejected is te best word i would use for the mushroom cloud out of the mouth.

Commonly used on guys, when te see someone ‘hot’ or think perverted thoughts.

Hey you forgot the nosebleed , lol i love that expression.

Hey is it even a expression the nose bleed? -.-

did you draw these? they are really good. i’ve always wanted to draw anime. im skilled, ut not that skilled. 🙁

you forgot ecchi encounter, that expression is priceless lol

All these are obvious common-sense expressions. How about faces like =_=? What does that mean?