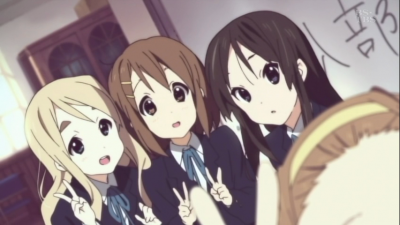 I just finished watching the first episode of K-ON! I guess they forgot to add the “ROC” to the first part of the title. Yes, I am going through my anime backlog by just picking the most popular (according to Anime Nano) series. I knew I invented that popularity cloud for a reason!

First impressions: Mio is hot. Too bad she doesn’t wear glasses. Might have to watch some more in case she eventually does. 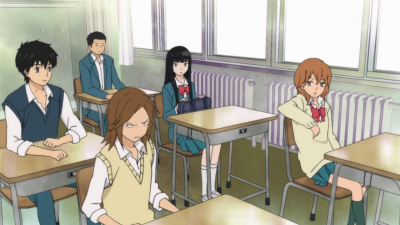 So I watched another episode of Kimi Ni Todoke. It seems that the major force that will drive conflict in this story is the misunderstanding between Sadako and the dude (still can’t remember his name). Apparenlty Sadako really only had feelings of respect and admiration for the guy, and the guy kinda actually liked her. But come on! He chooses to sit by her in class, goes up directly to her to talk with her, etc.

They could really just hook it up already! But maybe that’s unrealistic since they’re moody high school kids with insecurities.

Also, I think that Ryu guy wants Sadako and is more her type: quiet and introverted. 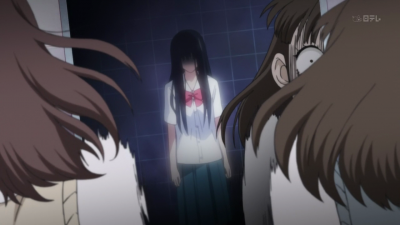 I figured I’d watch a new anime of the Fall season since I don’t wanna burn through my backlog of House and Glee too fast. Or I just needed a 30-minute show versus the monumental hour long things that seem to be pretty popular these days. Anime Nano said that “Kimi Ni Todoke” was pretty popular so I went with that, not really knowing anything about the series.

Basically it’s the story of a girl (Sawako) who is scary-looking but actually quite nice. Everyone thinks she looks like a ghost or something and apologizes to her, running away, when they see her. Everyone but this cool dude who she met on the first day of high school. She likes him for obvious reasons, but she has a hard time opening up to anyone.

As far as these types of shows go, they usually end up taking a good chunk of the episode count having the girl get nervous and running away from the guy until she finally confesses to him. Kimi Ni Todoke somehow avoids this by making Sawako unnaturally confident around the dude (I can’t remember his name). By the end of the first episode, she’s opened up to the guy and much of her class, who previously excluded her and made her do class chores. What the heck is going to happen for the rest of the series!? There was pretty much no conflict at all, which meant the show was a bit boring. I kind of expected Sawako to get hit by a car or something at the end to shockify the series a la Kiminozo (Kiminizo?).

I dunno if I want to keep watching, but I will say that the anime is a joy to see. This is the first time I’ve watched an anime on my 54 inch plasma in 720p glory. The ending credits looked so nice that I wanted to watch them over again! Much much better than my college days of watching Love Hina in blockified horrendous fansub. Probably in 320×240 or something. Gross!

Hopefully something will come up that will make the series more interesting. Like Sawako falling into a coma (probably not) or a super bitch coming along to steal the dude (probably more likely) or the dude having some dark secret like being Batman.