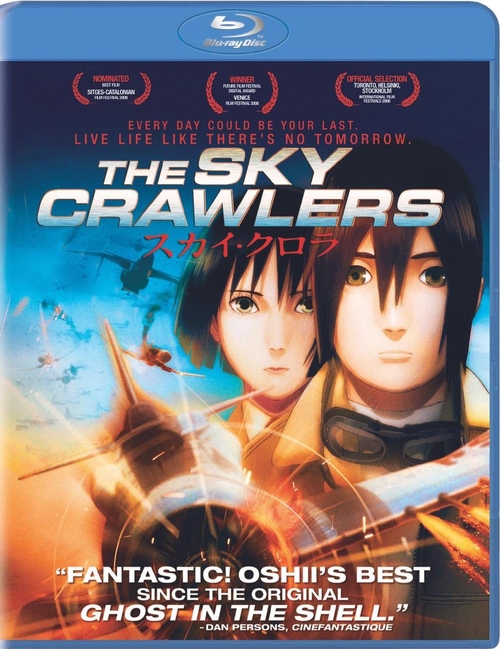 Thanks to Sony Pictures Home Entertainment for sending me an advance review copy of The Sky Crawlersï¼ˆã‚¹ã‚«ã‚¤ãƒ»ã‚¯ãƒ­ãƒ©ï¼‰. It’s out on May 26th.

>>Iâ€™m convinced it has to do with the aesthetics of Japanese cinema.

No, it’s the director’s fault, Mamoru Ishii. He actually purposefully tries to distance his movies from the audience because he’s a pretentious fuck, but his work is often great (and also often crap).

I thought the character designs fit the tone.

As for it looking like a video game, much of the CG was done by the team behind the flight simulation game series Ace Combat.

Sky Crawlers is a tough nut to crack and really needs rewatching to be fully grasped (which is difficult to do because it’s so slow) but there’s a lot of reward to be had for plunging the depths.

I agree with basically what you said, slow but beautiful. I was very confused with the story for the 1st half of the movie to the point my head started to hurt (could’ve also been done by the animation).

It wasn’t the pacing, or the character designs, or the maddeningly ambiguous plot, my biggest gripe with Sky Crawlers was that the characters just weren’t interesting. There was no connection, nothing memorable, or even anything about them that made me want to like them. They had about as much personality as drywall, and for a narrative attempting to accomplish more than just to be pretty aesthetics and simple reassurances, establishing a remarkable cast has to be first priority. Instead it was the story’s greatest failing.

I wanted to like Sky Crawlers, I really did. I just couldn’t manage it. It’s pretty to look at, I’ll give it that (assuming you can get past the character designs).

Maybe I’m not “artsy” enough, but all the pretty pictures couldn’t do anything for the rest of the film.

Yay! A new review! 😀 Heh, sorry, I just enjoy your blog a lot.
Anyway… despite the fact that most of you all have given this flick a thumbs down or sideways, would it be worth a watch just for the artwork? I’m aesthetics crazy, so that’s a big draw for me. How similar is it, in terms of pace, narrative style and the like, to Ghost in the Shell? Obviously the character designs are way different, but I’m curious.

my God, i thought you were going to chip in with some decisive insght at the end there, not leave it with â€˜we leave it to you to decideâ€™.

How does this look on bluray as opposed to dvd? I just got a blu ray player and I want to start getting more anime for it.

Generally Blu-Ray just looks better and sounds better, but it depends a lot on your TV, too. I use a computer monitor hooked up to my PS3 and it’s noticeably nicer. I mean, I’d rather watch stuff on Blu-Ray than DVD, but DVD is still pretty nice.

Slow pacing is usually absolutely fatal to these kind of films, which on the outside should promise thrilling dogfights and explosions. It’s interesting having a war film criticizing the glamorization of war, though like McDonald’s telling you Big Macs are bad for you, it’s kinda hard to sell unless you do it just right.

Also, I might be crazy but the BluRay cover reminds me of Top Gun.

Nice review! Definitely gave me insight before actually watching it!