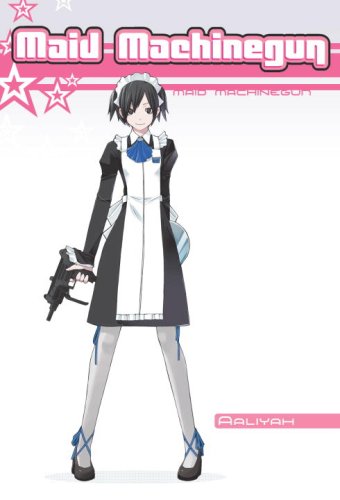 Book Blurb:
In Tokyoâ€™s Akihabara district, eighteen-year-old Aaliyah is a new maid (aka waitress) at a hopping maid cafÃ© where otaku (guys devoted to manga) convene to drink tea and talk comics. Aaliyah is determined to make a splashâ€“and her adventures are recounted in this sparkling diary.

Aaliyahâ€™s motto is â€œI wonâ€™t lose, even if Iâ€™m about to.â€ She plans to design a maid photo book, create a super-duper event, and solve all the fanboysâ€™ problems with her brainchild: â€œA Maidâ€™s Dimly Lit Counseling Room.â€ But somethingâ€™s wrong, and itâ€™s not just Aaliyahâ€™s bad Japanese. Why are the other maids suspicious of her? Why is the maid cafÃ©â€™s recent hire an incredibly handsome waiter, and why is he madly in love with her? It turns out Aaliyah has her own secret. Now itâ€™s time to find out the truth about the girl whoâ€™ll follow her dreams and fantasies anywhere and do anything to become the perfect maid!

Review:
Maid Machinegun is sort of a light novel, in a really loose sense. It’s more of a collection of essays about being a maid, written by our protagonist, Aaliyah. From this maid-in-training, we learn about the quintessential foundations of maid-dom. What skills are necessary? What are the charm points? What goes on during a maid cafe interview? At some point in the story, weird stuff starts happening and we get a pseudo-story going on.

Maid Machinegun is probably best left to those who are interested in the maid cafe subculture. I say this because I’m not really interested in the subculture myself. The novel is written from the point of view of an 18-year-old maid, then translated into English. There are a lot of culture references (I got many, but not all of them) that are explained in the back of the book. These references make it really difficult to get into the book if you aren’t already very familiar with Akihabara culture. But if you were familiar, you’d probably be reading the book in Japanese.

I guess my biggest beef with this book is that it’s just sloppily written. I understand that it’s written by an 18-year-old, so it’s not going to be Faulkner. But there’s just so many non-sequiturs that are supposed to be cute that don’t make any sense. Maybe there’s something lost in translation, but I have a feeling it’s just the result of someone writing a novel when they should be posting in a personal blog. Sure, the novel is supposed to be a series of online essays, but that shouldn’t mean that the quality of writing should be so low. Simply put, entire blocks of the novel could be removed without any real effect, besides making the novel shorter (and much more readable).

Another criticism I have for this novel is the title. Maid Machinegun might sound really cool, especially when the cover also has a picture of a maid wielding a compact machinegun. But like I mentioned earlier, a large portion of the book is just Aaliyah going on about being a maid. The last fifth of the book may or may not contain actual machineguns.

Overall, Maid Machinegun was kind of a pain to read. The cutesy writing and my lack of interest in maids (I mean, there’s about three pictures in this entire novel, and then a whole lot of words about maids!) probably ruined any chances for me enjoying this novel. If you’re interested in the actual workings of being a maid, you might like this. I’ll just stick with stuff like He is my Master.

Many thanks to Del Rey for sending me a review copy of Maid Machinegun!

And to think I almost bought this one… in Japanese. Well, it was second-hand and cheap as hell. Sounds confusing as ever (may or may not contain machine guns?)

The author uvazhuha! Here’s how to write blogs must! Everyone stands to learn, boys!