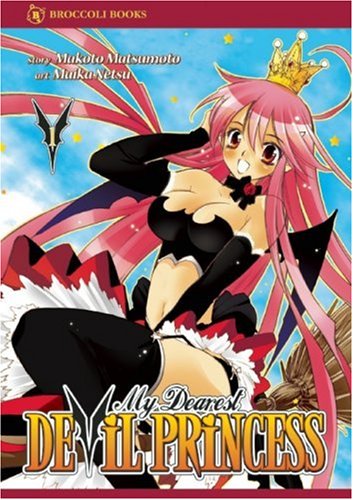 Book Blurb:
A box that grants three wishes is a dream come true. At least thatâ€™s what Keita thinks, until he opens the box and finds a girl inside. But this is no genieâ€”Makiâ€™s a devil princess and sheâ€™s come to take Keitaâ€™s soul! But she can only take his soul after he makes his third and final wish.

As a sheltered demon with little knowledge of how to be evil, Maki must rely on her trusty guidebook to learn the nefarious arts and trick Keita into using up his wishes. Until the, Makiâ€™s going to live with Keita until he canâ€™t stand living anymore!

Review:
My Dearest Devil Princess starts out painfully generic as Keita opens a box, causing Maki to plop out, Keita to touch her boob, and eventually, Maki becomes his live-in “girlfriend.”

The thing about My Dearest Devil Princess (let’s just call it MDDP) is that while the setup is pretty standard, there’s enough originality that makes up for it. So yeah, we get a lot of “haha, Maki’s a noob at human life” jokes here and there. She prefers to be naked like, all the time and flies without even thinking twice about it!

Beyond that there’s the sexual innuendo jokes. The “but you’re the first one to open by box, my first time!” jokes. And then there’s the random jokes like where Maki shows up in Keita’s bag, miniature sized. He tries concealing her, but not before the two otaku types jump him and ask if he’s “into figures.” Didn’t something similar happen in Midori no Hibi?

Also, I want to point out that like in Fate/stay night, Maki needs her mana recharged by Keita after she uses her powers. But instead of JAMMING IT IN, she just needs some of his blood. Apparently Keita’s dad is fine with Maki living in their house as well as her tendency to drink his son’s blood. He must’ve been hypnotized or something.

One note about the art: there’s a heck of a lot of panty shots. I mean, whenever Maki is wearing clothes there’ll be a panty shot (otherwise her hair will be strategically covering stuff up). The other girl characters seem to get some interesting camera angles as well. I approve!

The first volume basically introduces the characters and gets things set up. Keita seems to be really protective of Maki, even though she’s technically trying to reap his soul (“but she’s still a girl!”). Natsuki, the girl who sold Keita the demon box, seems to be a principal instigator in causing trouble. She’s actually one of my favorite characters (probably because she wears glasses). There’s also the track team senpai and the class rep who actually does an “Oh HO HO HO HO” laugh. Oh, and the (flat-chested) angel who actually seems more evil than the devil. It’s a fairly complicated cast.

By the end of this first volume, there’s some pretty interesting plot points being laid down. I won’t give it all away, but suffice it to say that a particular “love polygon” should provide some good humor in future chapters. So far Keita has used up one wish. I have no idea how this manga can end “happily” but I guess we’ll see what happens later.

Many thanks to Broccoli Books for sending me a review copy of My Dearest Devil Princess Volume 1!

…Hello! *waves*
I saw you on my friend’s blog (CJ-Borderline Hikikomri) and decided to check out the blog. It’s great! Uh…permission to add you to my blogroll?

I was acually looking into that series, but I’ve heard no word about it for a while. So it’s a review copy…any idea when it will release?

This volume has been out for a while. I think the second volume is out, too. If you click on the image, it’ll take you to Amazon, which says it’s been out since like November or something.