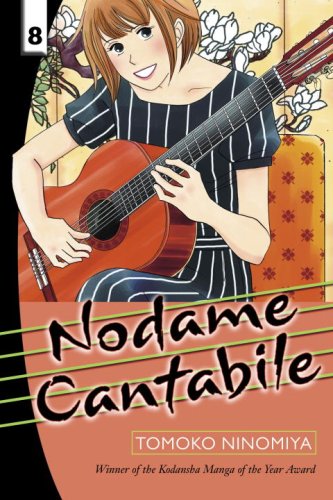 So in this volume of Nodame Cantabile, big things happen! For one, the Rising Star Orchestra has its first concert. This, of course, means there’s plenty of band nerd (and orchestra nerd) music-porn to go around. But I did notice a few weird things. Silly mangaka, girls don’t play trombones!!! Well, okay, some do, but it’s sad to say that trombone is a pretty heavily male-dominated instrument. I should try to get back on topic.

Another storyline issue is that Nodame is getting serious about practicing. Along with the Harisen teacher, she’s trying to win a piano concerto contest. Her weird looks and excellent playing get her further in the competition than expected! She talked about bribing the judges, but I don’t think that actually happened in the end…

Also, Nodame has successfully hypnotized Chiaki into being able to fly. For some reason, Nodame’s hypnotherapy has worked where others’ have failed. Maybe it’s because of Chiaki’s feelings for Nodame? You know, special feelings that he has for her and not for a random hypnotist… But this is bad, because now Chiaki can leave Nodame any time he wants! UGYAA~! What the heck is Nodame thinking? I guess she loves him enough to let him go. Or she’s just an idiot. Stupid, stupid Nodame!!!

Um, what else happens? At the end of this volume, Nodame is still in the running for the contest, and there’s some tension in the RS orchestra! It’s a mild cliffhanger, I suppose.

Anyway, the series is actually progressing along now. Chiaki obviously feels something for Nodame, but who knows if he will sacrifice his career for her now that he can travel? Nodame is also getting pretty kick ass as a solo pianist. So character growth is pretty high this volume. I might have to slow down, otherwise I’ll hit the end of the US releases and find myself without new Nodame for a while!

Many thanks to Del Rey Manga for sending me a review copy of Nodame Cantabile Volume 8!

Ahh, this is such a great manga! It makes me want to play piano…but then I remember how much I suck. Anyways, now if piano doesn’t work out for Nodame, she can use her hypnotism skills and become a psychotherapist. It’s always good to have a backup, eh?

WHAT DO YOU MEAN, GIRLS DON’T PLAY THE TROMBONE?! UH?! Are you trying to have your readers believe classical orchestras are a male chauvinistic milieu where girls are only allowed to sit and look pretty by a piano or a harp or carry around tiny, graceful instruments like the flute and cannot play more “muscular” instruments? Because that’s exactly what it is– oups, sorry, getting carried away there for a bit.

But, yeah, on the topic of female trombonists, in my high school there were not only one, but TWO female trombonists. And both were pretty kickass, so much so that even the (male) horn players were all quite admirative. And my best friend was a female horn player. 🙂
Then when I went to college/grad school â€“ I was a conducting major, we were two girls in a class of twelve â€“ I met some pretty kickass female trumpeters, horn players, bass clarinettistsâ€¦ and even a lovely Japanese tuba player with a very powerful sound! Not to mention an amazing female percussionnist who could wipe the floor with Masumi-chan anyday (and I’m a huge Masumi fan).

So things are definitely, if slowly, changing. Gyapiiiiiiii! And long live Ninomiya Tomoko and her fantastic cast of characters! I cannot get enough of them, they are so lovable, each in their own (and sometimes pretty uniqueâ€¦ mukya?) way.

The Japanese manga is up to vol. 19! So there should be plenty more to be translated — and then read….

I also can’t believe how awesome this manga is (I recently got Volume 11) and the manga is closing in on 22 volumes in Japan, woo! But Del Rey has seriously slowed down the release schedule recently (try waiting from Nov. ’08 to July ’09, then Jan. ’10 for the next volume, dammit!)

The unlicensed anime and live drama are both awesome but it seems like a longshot for them to be adapted into english (not enough fanfare, maybe?)

about what bystrouska’s talking about, i agree. at my middle school, there were three female trombonists, me included, and that was out of five. please dont think that some instruments are only for girls, and some others are only for guys. girls can play any instrument a dude can.