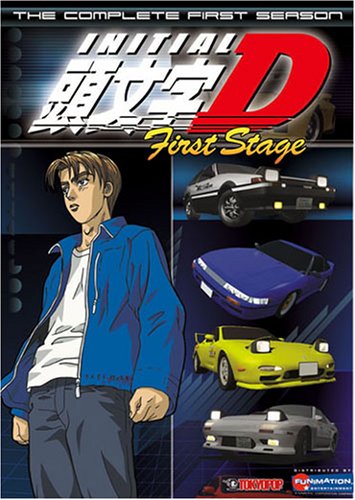 With his incredible techniques and top notch AE Eight-Six, Takumi blows the competition away battle after battle. As the word rapidly spreads about a new racer beating out the best drivers and cars that drift racing has to offer, one by one, new challengers quickly step out to battle him. Yet, time and time again, Takumi proves himself to be a force to be reckoned with. Can Takumi be the best?

Analysis:
In the past, my experience with Initial D has pretty much been limited to seeing the game at arcades and seeing parodies of the Eight-Six in anime like School Rumble and Lucky Star. I mean, seriously, how good can an anime about street racing be, right? The anime constantly gets good reviews, though, and it’s made the Toyota Trueno into something of a legendary vehicle (or was it the other way around?).

The first few episodes were incredibly slow. The characters would spit out facts about cars and racing and blah blah blah. I’m probably not the demographic target for this anime; I drive a Toyote Corolla and I totally love it. All this racing jargon just irritates me.

Once the anime got to the actual racing, though, I got interested. Drifting is essentially cool. Slowly, I found myself getting drawn into this story about a guy who thinks driving is boring while beating the pants off all other contenders. His car is a beat up Eight-Six, yet he can still beat riced-out sports cars? Neat.

I won’t lie. After watching the first DVD, I immediately popped my old copy of Gran Turismo 3 into the PS2. And I remembered why I hate these racing games. Everything is too technical. Plus trying to drift in GT3 just ends up making me look retarded. But still, the point is that the anime actually engaged me enough to pick up the controller again and try some drifting. I think Ridge Racer probably would’ve been more appropriate. Though the drifting in that game is waaayyy too over the top. But I’m digressing.

Everyone likes a story about a successful underdog. While Takumi isn’t “really” an underdog (he sort of starts at the top), his car is. With hard work and guts, he beats any opponent, even when the odds are stacked against him. Currently, the formula of Takumi meeting a formidable opponent, and then beating him is interesting. I can totally see it getting old quickly, though.

Character Designs and Art:
The sad part about me popping in GT3 after watching Initial D is that the graphics in GT3 were hella better! The anime aired in 1998, so it’s about 9 years old. And it shows. All of the racing scenes are pre-rendered CG, and they all look very crappy. Once you get past the flat polygon tree walls on the sides of the road, the graphics aren’t all that bad. But it takes some serious getting used to.

Also, the character designs are fugly. Thankfully most of the action occurs in the cars. Initial D is not an anime to view based on its visual merits. I’ll just leave it at that.

The Actual DVD(s):
I’m reviewing the Initial D First Stage collection released by Funimation (though I think the anime was originally published by Tokyopop). There’s this strange selection of “Original” and “Tricked Out.” Essentially, I think “Tricked Out” means the version where all the Japanese names are changed and they substitute the Euro Beat music for American music. I just watched the Original mode.

As far as extras go, this collection has a lot. There’s some fairly standard extras on the DVD as well as some stickers (Akina Speed Stars and one for the tofu shop, I’m thinking of sticking one on my white Corolla) and a “user’s manual.” The user’s manual actually has some useful info, like instances where Initial D has been parodied or mentioned in other anime/manga. It’s nice to see a lot of effort put into this package.

Conclusion:
For an anime fan like me, I think watching Initial D is worth it just to get parodies in other anime about it. It’s an essential series to watch. Though I’m pretty bad when it comes to watching those.

Initial D isn’t very nice to look at. In fact, it’s downright ugly. But really, it’s what’s inside that counts: drifting, hard work, and guts. Initial D even got me to play a little Gran Turismo again. Though I think I’ll be sticking to Burnout to satisfy my arcade racing appetite.

Many thanks to Funimation for sending me a review copy of Initial D: First Stage – The Complete First Season!

I got a bit of a chuckle when you said you drived a Toyota Corolla because in Japan that car is called the eight six (ie you basically drive the same car as the main character (although his has some modifications to it). Hope I didn’t give you any bad ideas.

Is it still called the eight-six? I thought it was only that particular model and year that was infamous. Maybe I should take my car out to the mountain pass then!

Oh Initial D. One of my favorite anime–I hope you continue this show it gets even better, plus the art gets upgraded in each season of it (almost to the point that, by the end, the characters look NOTHING like their original selves). Now to keep looking forward to some time in 2008-2009 for them to give this show an ending already.
Also, I had the same experience when watching this. It made actually get into drifting and cars although it didn’t last after I finished the show lol.

Don’t listen to that guy…corollas are not 86s. You are right, it’s only that generation of the Toyota Trueno. In America it WAS the corolla gts.

Hey don’t diss the animation. I thought it was pretty cool when i wathced it 6 years ago. You’re late. But yes the character designs were hideous. I don’t think I’ve seen women in anime look as fish-lipped and hairy-eyebrowed as in iD. Hehe you gotta love the middle-parted hair of Takumi that we ALL had 10+ years ago.

As for the rest of it…i dropped it after the the movie (3rd stage). In 4th stage, outcomes are decided by “Omg a bird distracted me!” and “He turned off his lights, where IS he?”. Save your time.

I loved the Battle Stage because just about all the most exciting racing scenes are packed in there, without what I felt were non-existent, juvenile and boring plots, and I loved the Extra Stage because it gave me the story about the two girls driving – one as the “pilot” and the big chested girl as the “co-pliot”.

I thought Initial D was great the first season is old and Shigeno’s art style is original(see Iggy).I’ve seen frist,2nd,3rd,and 4th stages and they all get better in animation ways.This is a great series.

The absolute best thing about Initial D, is when Takumi would take his friends out for a run on the mountain pass and they would literally sh*t themselves because they were so scared. I can’t remember the last time I laughed so hard watching any anime, let alone a serious one.

I found Initial D by accident one day on stage6. After a couple of episodes I stayed up 4 hours later than I had intended to just to keep watching. I’ve never had an anime do that to me before, much less any series of anything. For some reason I bond with Tak and want to see him succeed. I cant really explain my interest in this show. I drive a Nissan 300zxTT and I get overlooked alot as a driver. Its fun to see someone knock the socks off everyone else and show that the best can often be found in the least.