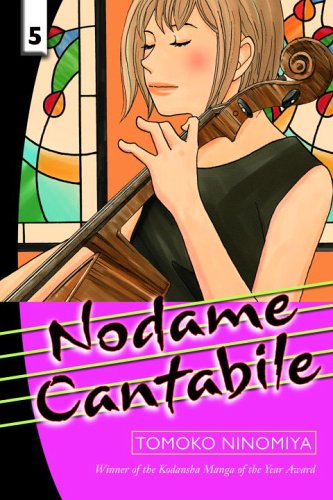 Story:
In Volume 5, Chiaki totally gives Nodame the cold shoulder! He focuses on the Rachmaninoff piano concerto that he’s to be featured on with the A orchestra. Meanwhile, the S orchestra is on a mission to beat the A once again by performing a costume concert. Masumi dresses up as a woman. Big surprise there…

After hearing Chiaki play the concerto, Nodame gets totally obsessed with it and practices it instead of bathing/eating. She gets Chiaki to play a duet with her, and they’re reunited! Yesss! Afterwards, rumors spread that Nodame is actually going out with Nodame. Uh oh!

Also, there’s a side story (like the last volume) where we learn more about loli Chiaki. He was a pessimist at a really young age!

Analysis:
Nodame Cantabile still doesn’t cease to entertain me. From the random snake humor to the pseudo-romantic parts! And by pseudo, I mean people implying that Chiaki and Nodame are a couple. I really wish their relationship would progress faster, but for now it’s fun as it is. I think Chiaki force-feeding Nodame fried rice is a sign that he likes her.

I usually don’t have a connection to the actual music being “played” in the manga since I don’t know the songs, but when the S orchestra played “Rhapsody in Blue,” it was totally awesome. I played the song (and had a featured solo) in high school marching band, and of course I remember how the opening goes. It felt like a really appropriate piece for the S orchestra to play, being more jazzy, modern, and less “legit” than the classical music that orchestras usually play.

Now, if only I knew all of the songs that appeared in the manga… I guess that’s where the anime and drama are more effective in their storytelling.

Nodame plays an instrument called the “pianica” in one of the chapters. There’s a really cute picture of her tooting on it, which makes me need to get a pianica! The picture was so cute that I scanned it at super high resolution and made a wallpaper of it! I heart Nodame. You can have it too, if you want:

Conclusion:
I’m not putting any hard ultimatum on which volume Chiaki and Nodame have to “do it,” but I really would like to see the series progress a bit faster. I’m sure the rumors will be a good catalyst for the next volume. And even if they don’t hook up, Nodame Cantabile is still a really funny music manga.

Many thanks to Del Rey Manga for sending me a review copy of Nodame Cantabile Volume 5!

The wallpaper is reaally hard on the eyes x__x

WHAT!? Nodame-chan? Hard on the eyes!? Never!

Or maybe you’re talking about that gross green background. Feel free to replace it with whatever color you want.

lol hey that manga is not half bad, i should check it out for sure ^^

Rhapsody in Blue is awesome. _>

Vol. 10 (English) is not due out until the end of July. Up through 9 it only gets better and better.

I once knew of a site that brief synopses of all the Japanese volumes — but I can’t find it now.