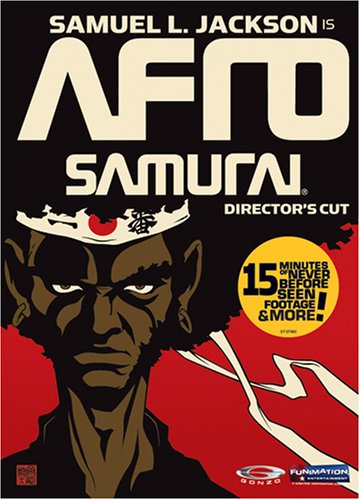 Story:
As a child, Afro saw his father killed by “Justice,” a gun-toting warrior. Apparently his dad was #1, and Justice was #2. After killing Afro’s dad, Justice became #1. As #1 (which happens when you wear the #1 headband), Justice became something of a god. Afro Samurai follows Afro’s journey to seek revenge against Justice to become the new #1!

Analysis:
The plot sounds pretty dumb, but it’s just about par for the course as far as these types of shows go. If I criticized this plot, I’d have to criticize a bunch of other martial arts films that had stupid plots too. I mean, if you think about it, Kill Bill is just about revenge too, but that movie rocks!

And so does Afro Samurai, in a way. Sure, the thing is totally in English, but the anime (and I do consider it an anime) retains a lot of street cred. Like Highlander, this anime was conceived by a Japanese director. Plus you can’t really anything worse by adding Samuel L. Jackson to it. It’s impossible!

I found the story progression refreshingly interesting. Afro’s past is really messed up, and it comes back to haunt him, literally at times. I don’t want to say the anime is Oscar-worthy, but it does make you think at some points. At times, the anime lets you sit back and enjoy the samurai action, too. I think it’s a good mix of action and drama, though the latter does seem a bit forced quite often.

Character Designs and Art:
As a pseudo OVA (it’s 5 episodes), Afro Samurai has a pretty good budget. I can’t say I’m in love with the character designs, but the animation is really good. Funny thing: I noticed in the first episode that there’s a few minutes of pure action, then later in a bar they use every single trick to not animate. Like having the back of character’s heads speak, repeating animation, etc. It was really funny since it was so noticable.

While the character of Afro doesn’t really talk much, his spunky ninja cohort does! Good thing Samuel L. Jackson decided to voice both, since a bunch of quick grunts from SLJ would’ve pissed me off. Samuel L. Jackson ends up bringing a whole lot to the anime. I’d say he’s the sole reason for the show’s “success.”

The animation was done by Gonzo. Personally, I don’t have a problem with Gonzo, though the kid version of Okiku totally looked like Misaki from NHK!

The Actual DVD:
I’m reviewing the “Director’s Cut” of the DVD which includes 15 minutes of previously censored footage (probably the naughty bits and some violence?). It also has a second disk with a bunch of documentaries about the making of the Afro Samurai anime.

The documentaries are actually pretty interesting giving background on the characters and the people behind the production of the anime. It’s really a nice package if you can afford the extra $5 or so that distinguish it from the normal version.

Conclusion:
I originally didn’t think that the Afro Samurai anime would be worth my time at all. However, having an open mind, I watched it and actually ended up enjoying it. At times it still feels like a wannabe anime, but for the most part, it’s enjoyable.

Many thanks to Funimation for sending me a review copy of Afro Samurai (Director’s Cut)!

I’ve never really been interested in American “anime”, but this is the first time I’ve heard that Samuel L. voices the main role in this series. That’s…interesting. xD

I can’t help but wander exactly what they spent $1,000,000 per episode on…because it certainly wasn’t plot depth or attractive women (ooooh shiny). I’m looking forward to the screening/talk at my university with a special kind of dread, especially if academic types turn up to reaffirm their idea that all anime is mindless violent or pukecute. Bah. 🙁

You should really examine how you look at things. what made you think this was going to be rubbish, initially? now, I haven’t read many of your posts before (I caught this off of a google homepage rss plugin), but it seemed pretty negative at first, even though it became pretty positive later, though still a bit begrudged. Was it because it this is an American project? Was it because of the gritty, urban looks and style of the characters? Did you feel like they were pushing a 1-dimensional idea of a new black hip-hop version of the traditional samurai. Or, based on what you heard about it, did you think it was some blinged-out rapper’s super-expensive pet project? What made it a “lame ripoff” at first? I’m just asking about your initial views. Everyone can cast their own opinion, especially you since you’re the one blogging and such, but what I’m after, and what I would like you to question yourself about, is what made you scrunch your face up when you caught wind of this anime? Does having a Japanese conceiver or director give it real credence? Does it HAVE to? You know, there are a lot of none-Japanese creatives that have a lot of success in the Japanese market. Why? Well if you saw relatively the same thing over and over, no matter how good it was, you’d eventually want to see something else. (I myself am a bit Ghibli-ed out) So the graffiti-styled designs, abstract over-emphasized character designs in American comics, or Ralph Bakshi-esque animations we tend to either look past or not respect in the states get eaten WHOLE in Japan.

Also, I’ve seen a couple of the episodes. Animation=SPECTACULAR, Voice acting all around was actually sub par to me, also bit forced. I only say that because if you look at films like Laputa, or Princess Mononoke, voiceovers from actors like Billy Crudup or Mark Hamill usually hinged between exactly fitting and incredible–even that guy from Dawson’s Creek did a good job in Laputa. Also, please KILL the actress who voiced the young American girl in Steam Boy. She interrupted my peaceful, bored-to-tears, 8-dollar movie theater nap with her hot, shrill amatuerishness and poor volume control.

Whoa, that’s a really good comment. I originally dismissed it because it really seemed like a manufactured piece of crap from the trailer. Especially since there was no SLJ in the trailer (his voice was added later to that one character).

I’ve been disappointed by American stuff that tries to be anime (like Teen Titans for example) and I figure this was the same. Why should I believe any different, right?

After seeing the documentaries on the special edition of the DVD, I found the idea was conceived quite a long time ago. I guess it technically shouldn’t matter if the director is Japanese, but to qualify as an anime? It should.

Once I actually gave it a chance, I enjoyed it. I guess you could say my initial reluctance was based on the info available at the time. I still think there are certain things in the anime that really clash at times, like how all American films require some kind of sex scene (whereas many anime won’t include those types of scenes). It seemed a bit forced and un-anime like.

But yeah, it was okay regardless.

Yeah, I’d have to say I was surprised too, just on the note of Americans doing ANYTHING called anime. But, to tell you the truth, I first saw Afro Samurai on this SWEET black n white flash site with just him and the other characters on it. It hit me clean, and I fell in love–Didn’t know where it was from, didn’t know Samuel L or Ron Perleman was going to voice it, didn’t know it was going to be big-budget. So, I guess the way a person sees or hears something for the first time (especially with American marketing) can definitely affect their view, but I’m glad you could see it for what it really was (good OR bad) afterward. Clear scrutiny is a great skill for reviewers to have–Keep it up:)

Oh yeah, and TEEN TITANS does blow chunks. if you’re gonna do something anime-style, at least be able to do things on the anime level BEFORE you go for that zany anime comedy stuff–that’s like just drinking the foamy head of a beer and not rest, or just like eating the skin off of fried chicken and not the rest. Boy, bad tweening and lazy drawing just isn’t going to cut it.

Anyways, I like your site so I’m gonna look around in it some more.

This anime would’ve been a hundred times more awesome if they had Samuel L. Jackson screaming “I want these motherf*cking snakes off this motherf*cking plane!”

One thing that “Steamboy” and “Laputa” have in common are that both of them feature Anna Paquin in the lead; she was good as Sheeta, but it was a little odd to hear her as a boy. BTW, the VA for Scarlet O’Hara, the American girl, was none other than Kari Wahlgren. She’s done other Anime roles, including Raine Sage from [i]Tales of Symphonia[/i]. I thought she was great in that game, although I do have to confess it was surprising to her her as a bratty girl in [i]Steamboy[/i]; she’s SUPPOSED to be obnoxious, so I think it’s fitting that she SOUNDS obnoxious. In that essence, she did a pretty good job.

thank you for visit .arigto.