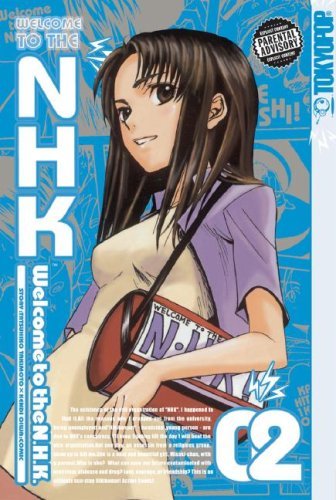 Story:
This volume of NHK covers Satou and Misaki’s fake date with Satou’s mom, who instantly sees through her son. After that, we find out why Yamazaki is such a misogynist. Then Satou gets whisked away to a lone island with his senpai, unaware that it’s really a suicide club meeting! Will this be the end for Satou!? Probably not; there’s still a few volumes after this one.

Analysis:
This volume was just a lot of fun to read. I think it’s a combination of the really great art, and the sadistic pleasure from seeing people whose lives are more messed up than your own. In Satou’s case, his live is super messed up! But it’s not only Satou.

Yamazaki, Kashiwa, and even Misaki all have serious issues as well. Yamazaki has issues with women, Kashiwa has some serious drug issues, and Misaki hinted that she’s a terrible person, though we have yet to guess why. Maybe it has to do with her crazy wiretapping of Satou’s house.

Somehow, all of these serious real life issues are incredibly enjoyable when put into a manga context. Would I laugh at a real life lolicon or drug abuser? Probably not. But NHK makes it very amusing. The highlight of the volume had to be when Satou, originally against the suicide, starts getting mad at the group for reconsidering. Satou has some serious issues…

Conclusion:
Welcome to the NHK Volume 2 is yet another solid volume. I’m really enjoying this series, and I’m realizing why people said the anime version paled in comparison to the manga. I’m really looking forward to the next volume, where we might actually learn a bit more about Misaki and her issues.

Many Thanks to Tokyopop for sending me a review copy of Welcome to the NHK Volume 2!

Hmm, funny how differently we interpreted Misaki’s “bad person” line. I can never believe she was a bad person no matter who says so, even if it’s herself… So until proven otherwise, I’m supposing she just has serious self-esteem issues, maybe because of pressure from her mom (who seemed like the type to be mentally abusing the poor little girl).

I practically made up this scenario in my mind where her parents are placing unrealistic expectations on her and when she fails, they call her the most troublesome, worthless, miserable failure of a child ever to exist etc. So in her own way of saying “I’m not bad” she’s trying to find somebody who’s demonstrably much more of a failure than she, so she can stand up for herself and say “Well, at least I’m not as bad as him”.

Another scenario I have is basically along the same lines, but maybe her religious parents were telling her “You’re so pathetic you can’t even save your own soul, let alone anyone else’s”, and she’s trying to prove them wrong. Although externally demure, she shows her defiance by choosing the hardest possible task to prove herself: save the immortal soul of a hopeless hikikomori otaku lolicon!

Maybe I’m making all this up so that there’d be at least one speck of light, one pure angel in the midst of the grimy, gloomy, rotting nest of rats and cockroaches that is NHK’s portrayal of modern Japanese society. So that there’d be something still untouched by the cruel world around them. Maybe I’m just hoping for too much, and she’ll have her own weaknesses, and her sins, but… Until proven otherwise, she’s an angel to me!