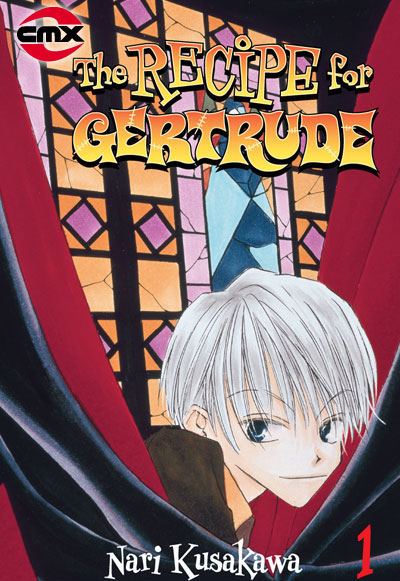 The Recipe For Gertrude is not a cookbook, but a manga. And here I was thinking I’d be able to cook for Gertrude. Or cook a Gertrude…

Story:
Gertrude is a demon. He’s unlike normal demons in that he was manufactured from the parts of a bunch of other demons. Because of this, he’s being constantly hunted for his body parts (from their original owners). Gertrude is looking for the “recipe for Gertrude” which is a list of the parts that make him up, and apparently where they came from. I’m guessing that once he destroys it, he won’t be hunted down anymore…

On one search for the recipe, Gertrude meets a weird girl named Sahara. She’s weird because she doesn’t particularly think all of the supernatural stuff happening around her is that strange. She befriends Gertrude and becomes something of a sidekick to him. Together, they search for the recipe while fighting other demons, etc.

Analysis:
When I first heard of the plot, I thought it was pretty interesting. As far as manga go, I think it’s fairly original, which is sort of rare these days. The manga does do a good job of not turning into a “demon attack of the week” type of deal, too.

What I like about this manga is that the characters have actual dimensions. Like Gertrude is constantly torn by his existence as a demon. He technically is one, but none of his parts are actually his own. The only thing he has is his soul. He also tries to take the high ground a lot, rejecting his evil instincts.

There’s a slowly developing relationship between Gertrude and Sahara that’s really nice. It isn’t the typical “they like each other but can’t say it” plot. It’s more of a gradual recognition thing.

This volume of the manga also had another one shot story that didn’t have anything to do with the Gertrude plot. I didn’t know this at first, and it really confused me. The one shot story was really cute. Maybe the next volume will have another.

Character Designs and Art:
I really don’t like Nari Kusakawa’s drawing style in this manga. For the first few chapters, the art looks really horrendous. The art does improve in the second half of the book. The character designs are also pretty bad. They’re about as generic as you could possibly get. I think Gertrude looks a lot like Sahara, like if their hair was the same color…

Still, I think Sahara is kind of cute. I’m not sure why though. Probably because the artist likes to lay on the blush a lot. Also, Puppen and Mariotte are pretty cool.

Conclusion:
Despite the somewhat bad character designs and art, I really like this manga. The plot is decent and the relationship between Gertrude and Sahara is cute. The volume ends on something of a cliffhanger, so that’ll force me to read the next volume, too.

Many thanks to CMX Manga for sending me a review copy of The Recipe For Gertrude Volume 1!

9 replies on “The Recipe For Gertrude Vol. 1 – Manga Review”

Don’t stop reading until the end of the series! “Gertrude” improved with every book, and the plot became so engrossing. I loved the 4th volume! I agree that the art is a little lacking…

I read your review after writing mine and I was kind of surprised that you didn’t like it. So it’s a good thing it gets better! I have up to volume 4 I believe, so I’ll definitely keep reading it!

Yup, I was not overly fond of the first volume. Every book trumped the one before, and taken as a whole, the series was very good. I’m glad I picked up the 2nd volume!

OMG! Best series EVER! The only problem is finding Nari Kusakawa’s address. And finding a Recipe for Gertrude website.

I like the way that Nari Kusakawa draws. Her style, to me, is unique. I thoroughly enjoy reading her manga and wish that it would continue on forever! I have read the first four manga a dozen times and am waiting to recieve the fifth one in the mail. This is one of my favorite mangas of all time!