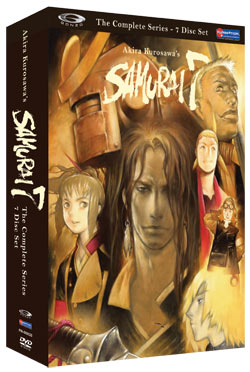 Story:
I’m not sure how closely the anime follows the original film, but I’m pretty sure this is an updated version of Seven Samurai. Like with mecha. A small village is being bullied around by some ex-samurai who have modified their bodies with cybernetic implants. I guess that after the war, they didn’t have any work, so extorting villagers seemed like a good plan.

Analysis:
I only watched the first disc of 7 in the box set, so my analysis will be kinda limited. I’ll update as I continue to watch the rest of the series.

Apparently, this anime cost a crapload to make. I think I read that each episode cost something like $30 million!? The animation certainly is good looking, with one caveat. CG!!! Seriously, do they need to make everything CG? The mecha I can understand, but a necklace? Grass? Does it really take more work to draw it? The CG is pointless and it makes the anime end up looking inconsistent. Years from now, people will shudder at how bad the animation looks, even for $30 million an episode.

As far as the actual anime goes, I think the pacing could be faster. The first two episodes feature very little in terms of excitement. There are some pretty cool battles later, but I wish the plot would hurry up already. At the end of the first DVD, the villagers are still in the city, and they only have 4 samurai! And only 2 are good! I just get the impression that this anime could have been something like 13 episodes instead of 26. The pacing definitely needs a bit of work. I guess we’ll see how it goes in the next episodes.

The Actual DVDs:
This box set is pretty sweet. The DVDs are all arranged in one of those folding compact holders for maximum space efficiency. There’s a separate compartment that holds a bunch of mini artbooks: one for each volume of the anime.

One thing I noticed is that the DVDs featured 4 separate audio tracks. They had English and Japanese tracks, both with a Dolby 5.1 and stereo option. I don’t have a 5.1 audio setup though, so I couldn’t test it.

As far as DVD extras go, there were character profiles, a Japanese promo video, and a few other things (probably trailers and whatnot). There wasn’t really anything special that I noticed. It’d be nice to see some kind of comparison documentary between the original and the anime remake. Perhaps it’ll show up in the later DVDs.

Conclusion:
The Samurai 7 Box Set is a pretty slick package. The story itself hasn’t gotten me totally convinced yet. I was impressed by the fight scenes, though. Hopefully the rest of the series will be faster paced. If they keep up the action, I think Samurai 7 could be a really good series.

Many Thanks to Funimation for sending me a review copy of the Samurai 7 Box Set!

Anyways, Samurai 7 starts great but Gonzo ruins it during the middle of the series. a 13 ep series would have been much better.

I haven’t watched Seven Samurai. Maybe I’ll try it out.

If I remember correctly, the pacing is about the same throughout the series, with interspersed drama/action (the usual).

I have to disagree with Stahn on the 13 episode thing. If the story was only about action then 13 would have done it. However, the characterâ€™s motivations needed time to be fleshed out. It it was only thirteen episodes they would have had to choose mainly between plot development and action.

I didnâ€™t have any real complaints after watching the series. Then again, Iâ€™m easily amused =P . . .

I was pleasantly surprised with this one. “Most” of the episodes look good, though here and there the animation drops some. I think the pacing could have been a little more faster, but that’s just me. Despite that, I’ve bought the dvds, maybe I;ll watch them again since its a break in between the seasons.

Having seen the original movie a couple of times, I couldn’t stomach finishing this re-adaptation. Starts out ok, but the rest draaaags on, and I gave up around ep. 19. Way too much corny stuff going on and annoyed me too much.

I don’t think each episode cost quite as much as you mentioned, heh. Afro Samurai cost about $1 million per episode, and that was only doable with financial assistance from US channel Spike TV. Even with that, Gonzo cancelled their work on that other OVA they were working on last fall (M-something, name escapes me), citing lack of funds.

I’ve watched the film. it’s classic and great. the characters in the anime somehow followed the idiosyncracies of the film characters. But i really don’t like having robots in the anime adaptation. ^_^

I personally loved this movie and I am a HUGE fan of the origanal movie. To correct the above statement above though it actually cost 300k an episode to produce. True there are some slow points in this set but it really is one of the best mini-series that has aired.

PS some of the best fight scenes are in the middle (at Kanna village of course) and near the end.