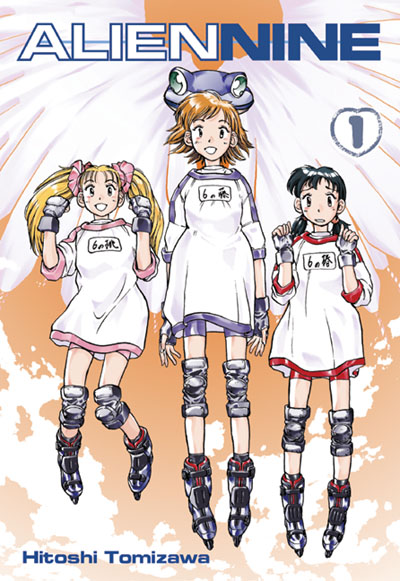 I remember watching the Alien Nine OVA a couple of years ago. All I remember is that I was totally confused at the end, and I didn’t really like it. Packing a lot of manga into a short OVA is typically a bad idea. The manga can just explain a whole lot more than a two hour animation.

Story:
In the not too distant future, aliens invade Earth constantly. For some reason, they tend to prefer schools for their invasion locations. Each school has an alien defense team whose job is to catch the stray aliens. Yuri Otani has been chosen by her class to be a part of this team. Unfortunately for her, she totally hates aliens.

Yuri is joined by Kasumi, a gifted genius type, and Kumi, a logical thinking type. Together they use Borgs, a symbiotic alien, to catch other aliens that pop up on campus. The girls wear the Borgs on their heads as a sort of helmet. Yuri just cries a lot while the other two do the catching. For some reason, she’s not allowed to quit, even though she hates the job.

Analysis:
Alien Nine seems like a really simple concept: girls have awesome adventures capturing aliens at school. Underneath, though, there’s a lot of psychological stuff going on. The whole situation with Yuri being stuck doing something she hates could be symbolizing the way that youth are treated. Yuri is constantly crying, yet the only response she gets is “it can’t be helped.”

Of course, this is not to say that the alien battles are not awesome. They are. I especially like how the Borgs use tiny drill-like appendages to attack. It’s way high tech. There’s also a plot being developed where the teacher in charge of the alien defense team has ulterior motives. Nothing really gets explained in this volume, though.

Character Designs and Art:
I really hate the character designs. The characters just look really ugly to me. Their ears are way too big! The characters just don’t look right. I don’t know how else to explain it. I do like the alien designs, though. They’re weird enough without being over the top. I especially like the punching alien cow thing.

For the most part, the art is actually good. It’s not too often that I like the art, but hate the character designs. I guess I can live with it.

The Actual Book:
The actual book is nicely done. The inside of the covers have printed art on them, which is a nice touch. I noticed that the art went all the way into the inner margins on the pages. So I had to open the book all the way up to see everything.

There’s a uniquely done translator’s notes section that every manga should emulate. It has nice visual explanations of things that were hard to translate. As far as extras go, there’s also an interview with the creator. He seems kind of creepy…

Conclusion:
I really liked this manga a lot; much more than the anime OVA. When the story actually has time to develop, it ends up being a lot more interesting. While I despise the character designs, I think I can live with them. I’d recommend the Alien Nine manga if you saw the OVA, and were upset that the plot went nowhere.

Many thanks to Central Park Media for providing me with a review copy of Alien Nine Vol. 1. You can learn more about the Alien Nine manga and anime at the official website.

Ah yes, I remember seeing the first episode of the OVA.. I agree that the ears were too big, but the designs in the OVA seem better to me, now that I get to compare the OVA and its source material.

I doubt I’ll read the manga though, I’ve got Negima!, Yotsubato, School Rumble and Mushishi already.

You should really rewatch the anime at some point – its actually really well done, and rather than being a compression of the manga I think that they actually add material to it. Admittedly, it does kind of just end part way through the story (in ending credits to the forth episode are really kind of evil), but so does the manga – Emulators (the forth book) doesn’t really have an ending either.

Hmmm. I guess I don’t really remember a lot of the plot of the anime version. I just remember the plot that they did have didn’t get resolved.

I think I was just expecting something different from the anime at the time, though. I wanted alien ghostbusting middle school! It was probably too deep. Like Lain, except not quite.