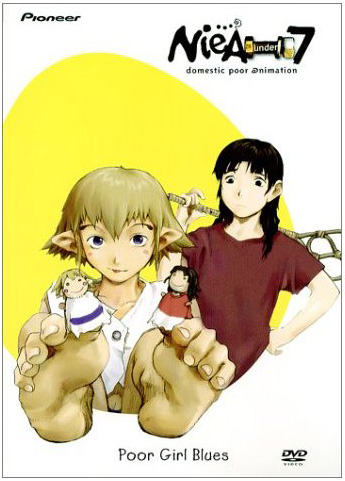 Hmm, I liked it. I liked Chikai and Chada, and the whole implied-but-unexplained world that Haibane also had.

Personally, it’s comparable with Bartender since nothing ever happens and you watch it just to relax. Pretty good, but still, Kanon > all.

This series is a bit erratic during the first five or so episodes — and then moves up to (mostly) a higher level — some very Takahate-sque work in the second half (including a fairly clear-cut homage to “Grave of the Fireflies”).

Most of the _best_ parts of this series are those that are least “exciting”. ;~}

I purchased the entire series a while back from a Walmart $5 discount bin. I haven’t had a chance to watch it yet, but I’m quite curious! I guess the reason why I haven’t watched is because, well, I bought it in a discount bin. It definitely made me worry, but it was so cheap I couldn’t resist. But, I tend to enjoy slice of life, so now I’m looking forward to watching it when I get the chance!

Niea_7 is generally fairly under-appreciated, but it turned out to be a show that really grew on me, something that I found had to be appreciated as a whole.

It’s biggest shortcoming is really it’s length – you wish that the anime had more time to add some brush-strokes to its painting of a peculiar world thats mostly like ours but just a bit askew. Some of the stories about genteel poverty in modern Japan are touching, but the characters and warmth of the show still make it wonderful place to visit in each episode. Not action filled, but a rewarding show to watch that put a smile on my face.

I second the last opinion. Many things were unresolved at the end, and while it is keeping with the idea that the ending is meant to be ambiguous, you can’t help but wish some things were resolved.

As for NieA, I like her even up till now…. arrogant and bad as she is, it was her eccentricity that won me over.