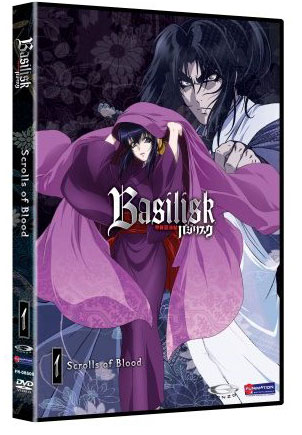 Story:
Basilisk is the tale of two ninja clans: the Kouga and the Iga. They used to be brutal rivals, but are now under a non-war agreement. They are hopeful that the love between Gennosuke of the Kouga and Oboro of the Iga will unite the clans once and for all.

Unfortunately, the clans get wrapped up in a competition to decide the next Shogun. A scroll is given to each clan with the names of ten members of each clan. Whichever clan disposes of those ninja on the scroll first wins the game and supposedly will thrive under the rule of the next Shogun.

Analysis:
While there’s an underlying theme of star crossed lovers (like ninja Romeo and Juliet!), this anime has one purpose: awesome ninja battles! And on that point, it delivers. Each episode I’ve seen has at least one ninja battle. Forget Naruto and filler episodes!

Each of the ninja have their own special moves. Like one of them has no arms and legs. I guess that’s not really a move, but you know what I mean, right? Oboro kind of reminds me of Aoi from Ai Yori Aoshi. She’s pretty boring and annoying. I’m pretty much only interested in the ninja fights, which this anime certainly delivers.

The Actual DVD:
The version I got of Basilisk Volume 1 is the normal edition. The only stuff included was the DVD and a preview booklet for other Funimation anime.

The video quality was good. The colors seemed vibrant and I didn’t notice any artifacting or other video issues. While a lot of the character designs are totally ugly, I think that’s the whole point. At least Oboro is cute.

As usual, I watched the anime in the original Japanese and subtitles. I checked out the English dub for fun, too. The English dub seems to take the translation too literally and loses a lot in translation. I guess it seems kind of cheesy to hear people talk about ninja stuff in English. Plus a lot of names were pronounced “incorrectly.” Zettai yurusenai!!!

Am I the only one that likes commentaries and extras about the people that worked on the English dub?

No, I enjoy English commentaries as well. The English dub is great and shouldn’t be treated as if it were useless.

The English dubs are great for people who enjoy them, but I just see them as kind of pointless.

If I had a choice between English dubs and a cheaper DVD to produce, I’d definitely choose the cheaper DVD.

Correct me if i’m wrong, but wasnt there only 1 volume of dub in existance at this time ?

As of now there’s 2 volumes available for sale.

have not watch this yet…but would love to..if i am not mistaken there is a japanese movie by the title of Shinobi which has the same story line n characters in this anime..it might be based on this anime or this anime based on the movie itself..really good movie..yall should go watch em..

Personally I’m of the opinion that dubbed anime loses something in the, er, translation.

I’ve never thought that dubbers treated the material very seriously, and had a distinct tendency to treat everything like a western-style cartoon: e.g. kid oriented.

Witness, for example, Tenchi Muyo and the Kermit treatment.

I speak Japanese well enough to get by without subtitles so of course I’m biased.

To its credit, you could certainly argue that dubbing does expand the fan base of anime by an order of magnitude; bigger fan base = more incentive to bring things stateside = more anime for everyone = hurray!

But yeah. Not a big fan of dubs here, either. I wish to god they would subtitle games (e.g. Final Fantasy) as well. One of the (many) great things about the Disgaea games is that you can keep the Japanese audio … the dub job there is enough to make you want to break the disc into little pieces and burn them.

But back on topic : Basilisk is a good series.

Repulsive characters are treated sympathetically; some of the attractive characters are pretty ugly inside. Pretty much all of the characters have their own lives, loves, hatreds, and motivations. It’s difficult to “take sides” between the two clans.