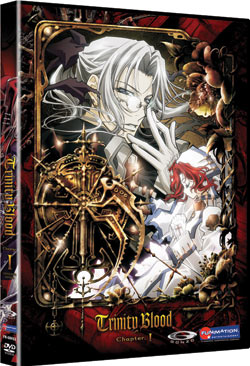 From what I’ve seen, Funimation is REALLY gung-ho about feedback from their customer base. Like they would give our university anime club a volume or two of the anime we wanted to show and send us feedback surveys to try and get people to fill out.

“Rozen Kreuz”? Boy somebody hasn’t been studying their Western occult societies properly. *sighs* Typical of Japanese “occult fantasy” series’ though, what with making the Count Saint-Germaine a villain in that one other series.

Yay for not reading history.

The best part of Trinity Blood to me was the music. It has an excellent soundtrack. It really is kind of mediocre, but there’s some cool parts toward the end. It’s based off a light novel series and I hear that those are REALLY good. I guess conversions never really work out that well.

hehe. I first heard of the â€œRozen Kreuzâ€ and the Comte de Saint-Germain from reading Umberto Eco novels 😀 I thought he’d made them up for ages..
Which anime series is he a villain in?

No-one learns history that interesting at school (not in England anyway). They want to keep kids bored so they don’t spot people not learning from the past..