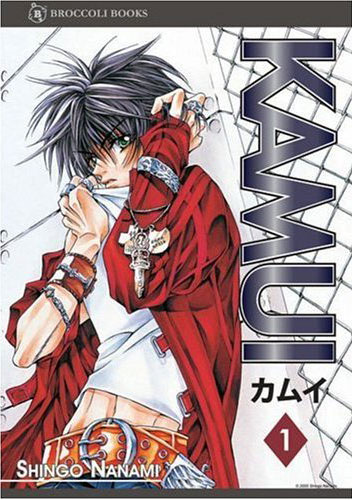 Another one of the manga that I got from Broccoli Books was “Kamui.” I seem to have procured quite a bit of manga (and a backlog!), so I thought that I better start reading! Here’s my review of Kamui Volume 1.

Story:
Kamui takes place in a sort of post-apocalyptic world. Apparently people got too into technology and the Earth struck back with two huge earthquakes. The people who survived are left to battle giant monsteres called “Atanan.” Luckily, some of them have super powers thanks to something called “Kamui.” There’s a lot of terminology to learn, huh?

A guy named Atsuma is sent from his village to retrieve a stolen spirit called Okikurumi. I’m guessing that the missing spirit is behind all of the atanan attacks and whatnot. When the story begins, Atsuma is trying to infiltrate NOA, which is a group of Kamui powered atanan fighters.

Atsuma helps one of the top officials, Sumire, kill an atanan. Afterwards, Sumire enlists Atsuma into NOA. He starts off under the command of Shui, a totally yaoi dude. Together, they try to find out what’s really going on behind the scenes of NOA.

Analysis:
Right away, I thought the story of Kamui sounded really similar to the plot of Final Fantasy VI. Y’know, humans using the power of spirits (which causes the world to explode). It’s also similar to Final Fantasy VII, too…

As the story progresses, Atsuma gets a first hand look at how the NOA works. Since we’re in a post-apocalyptic world, power rules. The officers in NOA all seem really corrupt and power mongering. It’s interesting that the officers are so willing to betray their organization just to learn more about it.

Right now the plot is centered around Atsuma trying to find the Okikurumi. He suspects that the NOA has it. Curious to find out more about their own organization, many of the officers of NOA are willing to help Atsuma. They also all seem to be romantically interested in him (even the dudes!).

Actually, one of the most distracting parts of the manga has to do with all of the innuendo. Pretty much every scene has sexual innuendo in it. Between Sumire and her assistant Aika, between Sumire and Atsuma, between Atsuma and Shui, between Yanagi and Hyde…

I think everyone in NOA needs to get laid quick! It would’ve been fine if this kind of thing happened once, but it happens throughout the entire first volume.

Designs/Art:
I’m not too big a fan of the artstyle used in Kamui. It seems a little too bishounen for me. Even the girls look really bishie. I was scared that some yaoi was gonna happen, but thankfully it’s only been suggestive so far. Even that kind of annoys me though…

Not counting the actual characters, the rest of the art is good. The fight scenes are especially well done. If this turns into a fighting manga, I guess that’ll be a plus.

There also seems to be a lot of fanservice due to the fact that Sumire starts almost every scene by being naked (or in underwear). Then Aika has to dress her. Then Sumire takes a shower or something… Kinda cheap, but fanservice is fanservice.

The Actual Book:
The print quality of this manga is really good. The ink is black and the paper is very white. The paper also seems thick in comparison to other manga that I’ve bought. Broccoli seems to put a lot of work into making their products high quality.

I did notice that the cover started peeling off when I opened the book all the way. This might be because it was a review copy, or just an accident. I didn’t notice this happening on any of the other manga I got, so it was probably just a fluke in manufacturing.

Conclusion:
Typically, the first volume of a manga is supposed to draw you into the plot and get you to buy the next volume. The first three chapters were fairly boring, while the fourth and last chapter made things a little more interesting. I read in another review that Kamui gets interesting starting in the next volume, so I’ll be sure to write about that once I finish reading it. Until then, I’d have to say that Kamui is okay, but the artwork and story don’t really do it for me.

Omega thanks to Broccoli Books for providing me with a review copy of Kamui. You can get more info on the Kamui manga at their official site.