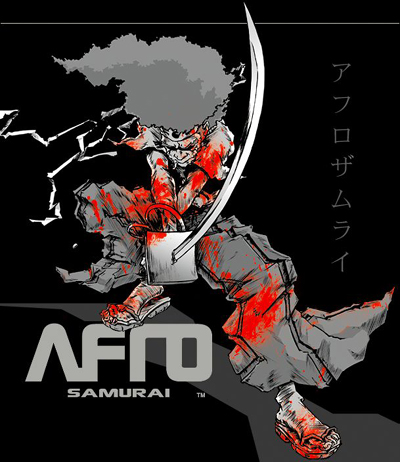 So I just read about this new anime called “Afro Samurai.” It stars Samuel L. Jackson as a Black Samurai who flips out and kills people for revenge. And he has an afro. Did I mention that I’m not making this up at all?

The plot seems pretty generic to me. This is the IGN explanation:

Afro Samurai takes place in a unique world that is part ancient Japan and part futuristic science fiction fantasy. Samuel L. Jackson stars as “Afro” the solitary samurai on a quest to avenge the wrongful death of his father. It is a story of bloody hardship and pain. Afro sheds no tears and knows no love. Forever chased by powerful enemies in a lawless technology-speckled dystopia, he evades bullets and blade to reach his final prey: a man who will not die.

Yep, it’s just your generic tale of revenge here. The anime looks like it’s gonna run 5 episodes, so don’t expect too much plot development. The plot synopsis tells me this anime might resemble Samurai Jack. I didn’t like Samurai Jack at all, though. I believe that this anime is being made for American audiences to be shown on Spike TV. So basically it’s an American funded Japanese anime…

It seems to me that people are overestimating the star power of Samuel L Jackson. Sure, he’s cool and all, but can he instantly make an anime mainstream? It might work for Snakes on a Plane, but I don’t know about getting people to watch anime.

The animation is being done by Gonzo, so I guess that gives the anime a little bit more street cred. Though with Gonzo, their anime are typically either super awesome or terrible. After watching the trailer, I’m pretty certain this anime will be on the terrible side.

It took me forever to figure out where to get the trailer, so here it is in embedded flash goodness. Samuel L Jackson seems to be strangely absent from it…

If that didn’t get you excited, there’s also a live action movie in the works. Starring (you guessed it,) Samuel L Jackson.

This has the potential to either be really awesome on concept (i.e. actually making an anime that can appeal to hardcore fans and casual American viewers) or extremely terrible in excecution.

Something is rotten in the state of Denmark…

yea, this series was announced a long long time ago. I was wondering what happened to it.

I can’t wait for it to finally air this fall on Spike. For over $1 million dollars an episode you know it’s going to be good. I’m going to try to get a fan site up and runing so if anyone can help me in any way possible I would be much obliged. My e-mail is [email protected]. Here’s my blog if anyone’s interested. Cool blog by the way.

I believe they (the PR people) are actually saying that it’s being made for Japanese audiences in mind.. but America gets it first of course..

Their reasoning being that each episode actually runs umm 25 (i think that’s the count) minutes long, but it’s being edited down to 22 for when it runs on SpikeTV.

Also there’s plans for a longer run if the 5 episodes draw well, but I guess that’s sorta a given with American network television.

Oh, and this is based off an actual manga isn’t it? So it kinda gives it a little more street cred I guess. But yeah.. what is up with Samuel “I’ll do it if you got the money” Jackson nowdays?

I wouldn’t say Sam “The Man” Jackson is in it for the money. A: He elegidly signed on to do Snakes on a Plane after reading the tittle and director’s name on the script. And B: Mr. Jackson is actually producing the show, which means he’s putting money into it.

Yeah, it’s being made for a Japanese audience…. sure. Anyway, my vote is on the “crap but may become popular” version.

May I say, “EEEEEEEE GONZO”?

Lol, on a serious note the animation quality looks good. But for some reason I just can’t understand why must they choose a samurai with an afro. People with afros always make me laugh, so it’s hard to take him serious even though he’s all revenge and angsty.

I’ve been looking forward to this for about a year. It’s a samurai with an AFRO, and it’s Samuel L. Jackson. That’re more than enough to get me to watch. 😉

You silly HUNG! If it’s GONZO, scifi and has gore and black people, it’s gonna be great.

tj han hit it on the head. OF COURSE THIS WILL BE AWESOME.

It proves that a black man can be a better samurai than an asian guy! HAR HAR HAR!

(But the other hand, IGPX, which is the Production IG and CN collab. Frickin’ rocks)

Wow. This contributes to the american stereotype that animes all about gore and blood. XD

I’m one of the producers on the show. Ask me questions and I’ll answer the best I can.

We hope that you’ll like our show! We’re really putting our hearts and souls into this one.

BTW – the music is done by RZA (Wu Tang and Kill Bill).

Ooohh… An anime for the American audience, you say? Looks like I’m going to watch this from the back and see what happens to the audiences in the front.

If it’s good, I might consider hunting for the DVD release.

An odd observation: Phil LaMarr, who did the voice of Samurai Jack, is himself black.

1. Will the manga Go along-side with the anime, or will it be a stand alone thing?

2. Will the original manga, done by Takashi Okazaki in ’99 be re-released?

3.Will they be reproducing the original Afro Samurai figurines or will they come out with completly new ones?

4. What is your actual role in the show?

Can you post some screenshots of the trailer please? Thx.

[…] This has got to be the funniest thing that Samuel L. Jackson has ever done.Â  I’m sure Snakes on a Plane makes the list of off the wall stuff he has done, but this has to take the prize for being the weirdest. Check out Afro Samurai […]

[…] I took a look at the trailer for Afro Samurai and wrote it off as some lame ripoff masquerading as anime. Plus I didn’t […]