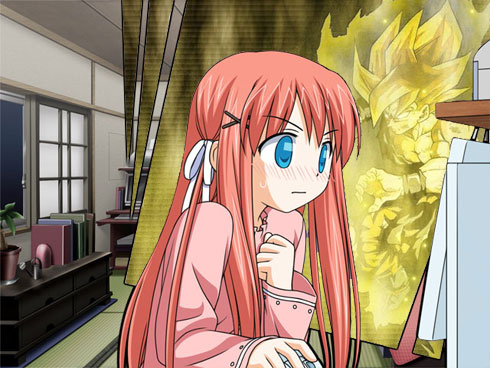 whenever I can’t find an appropriate picture on danbooru, I just use this…

The interesting part about these labels is that unlike other genre labels, they don’t really describe the content of the stories, but the target demographic. Mecha anime will have mecha in them, and mahou shoujo will have magical girls. Naruto is a shonen anime/manga, but it’s labeled as such because it appears in Shonen Jump, a magazine for young boys.

I think the conflict that people face stems from the fact that they equate these demographic labels to genre labels. They also seem to assume that only the “target audience” is fit to consume their own demographic group’s content.

In America, gender targeted television is fairly concrete. Lifetime and Oxygen are stations specifically for women, so most men will avoid those channels like the plague. In Japan, where cute reigns supreme, the division seems more ambiguous. 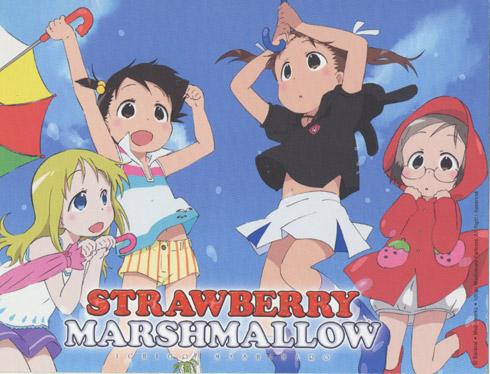 For example, Ichigo Mashimaro is a slice of life anime featuring four very cute little girls, yet it’s seinen (for older men). Azumanga Daioh, another cute anime starring a bunch of high school girls, is also a seinen. Does that mean only men aged 15-40 should watch these shows?

There have been quite a few anime that I watched and enjoyed, never even thinking that I was outside of the target demographic. Honey & Clover is published in a josei magazine; I’m not an older woman…

The dilemma for the American male shoujo fan becomes questioning whether it’s okay for him to read shoujo or not. I really think the problem is with the differing cultural ideas of what media is appropriate for male and female.

As with a lot of things, there seems to have been a bit lost in translation when translating gender demographics from Japan to America. In other words, yes Os, it’s okay for you to like Shoujo manga. Even Shojo Beat says so:

In contrast to action-oriented shonen (boys’) manga, shojo manga ruminate on themes of emotion, love, identity, and responsibility that often play out internally. That said, shojo manga are by no means just for girls. Shojo stories are about aspects of life that concern everyoneâ€”boys and girls, old and young.

16 replies on “What The Demographic Labels Shoujo, Shonen, Josei and Seinen Mean To American Anime and Manga Fans”

All the supposed oddities like Honey & Clover and Naruto, which have a massive cross-section of audience, prove this. People in a general sense will watch stuff of good quality regardless of who it’s initially marketed to.

The vagueness of such labels is why I tend not to really consider a show’s genre until it comes time to come up with an opinion on a show after having watched (at least some part of) it.

Concerning your statement: “The dilemma for the American male shoujo fan becomes questioning whether itâ€™s okay for him to read shoujo or not.” How much does it actually matter whether or not it’s “okay?” Either people enjoy something or they don’t, regardless of its genre or target audience. Good works will still be good works, whether the viewer is male or female.

BAH! I wasn’t looking for your approval! I AM THE SHOUJO DEMOGRAPHIC!

Holy Heaven, Ichigo Mashimaro is seinen? That’s confusing. I mean… at 23 I can watch this, but it’s definitely not a major interest show for me. It’s cute, yes, but I’d have to be horribly bored to watch it at length. Besides, outside of things that the older sister does, very little of what goes on seems unlikely to interest the seinen demographic — whatever that may entail. It seems like it’d go over better with girls around the 12-18 mark, merely for the cute factor.

And yeah, pervy older men, but do we really want to market a show that way?

Delete the other post plz, the used brackets produced some errors ^^

From Hidoshi
——–
Holy Heaven, Ichigo Mashimaro is seinen?
And yeah, pervy older men, but do we really want to market a show that way?
——–

Thanks for branding me as such ^^
Now, if i also admit to like watching Azumanga Daioh and reading Yotsubato i’m probably doomed! ;D

Ichigo Mashimaro is indeed a seinen, only not a very good one. Its execution is horribly forced, which is the reason it is boring. Azumanga Daioh is a far superior production (despite lacking in graphics), with a stronger story and characters who actually live in front of you instead of acting it. As a better show, Azumanga easily carries other demographics, too. I know many people who only watch it for the comedic element. To wit, when Osaka lets her soap to jump, some cry, some laugh.

As for marketing, it does not matter what we want. It matters that Japanese studios want to market to pervy old men. Look at the contents of the DVD booklet for Kamichu volume 4:
http://www.flickr.com/photos/zaitcev/192359952/
This is an utterly honest pandering to dirty old men. Geneon seems to want it quite clearly. Although I do not expect the same booklet to be used in their U.S. release this time around, the time for it is around the corner.

Ichigo Mashimaro is indeed a seinen, only not a very good one. Its execution is horribly forced, which is the reason it is boring. Azumanga Daioh is a far superior production (despite lacking in graphics), with a stronger story and characters who actually live in front of you instead of acting it.

Not really. From what I observed, Ichigo Mashimaro is actually slightly more realistic than Azumanga Daioh (especially with its characters’ behavioral traits), though not necessarily better. What you seem to be thinking of by “forced” is that the characters in Ichigo seem more down-to-earth and prohibited in their actions, and less zany and fun than the Azumanga cast. Also, neither of these shows has a story. 🙂

I don’t agree with the pervy old men thing: a person can appreciate something being cute without getting ecchi over it. Its a completely different kind of appeal.

Shoujo is not a genre, there are action, sci-fi, horror shoujo mangas. Same thing for shounen/seinen, there are romance shouen/seinen. Most manga magazine targets a specific audience, there are a few unisexual ones, but all the other are divided upon gender and age lines.
So shoujo, shounen, seinen, ladies/josei are not genres or labels but the audience the manga is made for. Manga is a business and the Japanese publishers have the authors shape their stories according to what magazine (and thus what gender and age) the manga is oging to be in.
Itâ€™s very easy for a Japanese reader to know what audience each manga is made for because in bookstores shounen and shoujo have their separate sections, and each manga is published under a collection name pertaining to their magazines usually. So most guys do not buy a manga published uner Flower Comics or Margaret Comics for example, they donâ€™t even dare go near the shoujo mangas.

Itâ€™s not rare at all that a shounen manga is actually heavily skewed towards females, some are actually made to attract female audiences to a particular manga magazine. (Angelic Layer for example)
The video games adaptation of Prince of Tennis were all made for a female audience (there is even a dating sim) There are male readers who are unhappy with this feminization of shounen manga.
Girls reading shounen manga is not rare or weird in Japan, the reverse is rare though (Otakus are a different case), and thus publishers do not seek male readership for their shoujo manga. But this is not an uniquely Japanese phenomenon. Itâ€™s considered more OK that a woman would read a sci-fi book than a man would read Harlequin romances, chick lit, or womenâ€™s magazines. Because women are considered to be inferior, and to become a real man you should not dabble in such things, but the views are not as negative with women. Itâ€™s not the genderized manga (or novels with Harlequin and â€˜chick litâ€™ being very clearly marketed at women only) system that creates sexism, itâ€™s part of it. This explains why most male western readers of shoujo who donâ€™t think theyâ€™re weird will not be the last to point and laugh at a guy reading Harlequin romances or magazines for women, and yes, they do have a few male readers. If homegrown stuff like this is gendered, then why should it be expected that Japanese stuff wouldnâ€™t be? Books for children can be enjoyable for adults too, yet they are clearly labelled as being for the former audience, and they of course turn away potential customers. Most manga are not art, but products, and like clothing for example they are strongly gendered because most guys are not interested in reading shoujo manga. Of course this is not innate, but a taught avoidance response to anything female, because most men fear not being considered manly enough.

With anime, even when itâ€™s shoujo, the producers often try to make it appeal to boys too, to increase the audience, they want to make as much money as possible. The book publishing market is bigger and has more products and lots of niches.
I doubt you would be one of the last guys to snicker at the sight of a western man reading womens magazines or romance novels, and in Japan shoujo manga is assimilated to all â€˜womanlyâ€™ things. I guess wetsern guys canâ€™t wrap their heads around that fact, and feel that comics and cartoons belong to them (guys)

Who’s the funky chick in the top pic, ive been tryinging to find out what she’s from for a while now but i havent found out yet.

[…] categorized based on their target audience, the most common being shojo (girls) and shonen (boys). Here’s a breakdown of the most common types of manga- note that readership is not necessarily constrained by target demographic. Here’s Shojo […]

I think it is perfectly fine for a guy to watch shoujo anime or read shoujo manga. My boyfriend watches shoujo anime and I don’t think he is any less manlier for it. In fact it solidifies that he is confident and manly for not being afraid to accept tat he likes those types of things 🙂