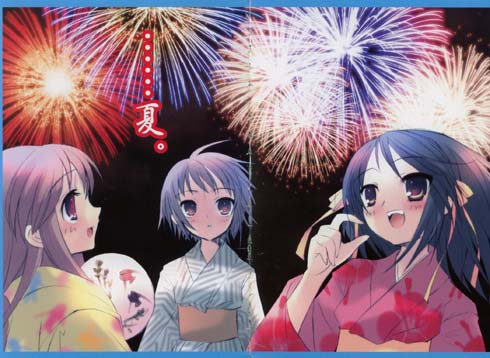 Sorry, SOS-dan, no license for you; just hanabi

So apparently Anime Expo is the convention that’s known for its anime license announcements. This year was no exception. A lot of “well, duh” anime were announced, but there were also a few surprises. ANN decided to compile all of these into a nicely ordered list. I thought I’d go through the list and give my 2 cents on the acquisitions (at least, the ones I’m familiar with).

.hack//Roots – Bandai
Hmmm… This one’s kind of a no-brainer. There are people who’ll buy .hack stuff no matter what. Personally, I don’t like .hack//Roots, but I have a feeling that .hack is a pretty good cash cow.

Black Lagoon – Geneon
Though I haven’t really been following this anime, Black Lagoon seems to have what it takes to be popular in the US. A badass chick, a robot battle maid, a wimpy Japanese salaryman (er… wait)…

Full Metal Panic! The Second Raid – ADV
They already licensed the first and second season of this, so yeah, this is another obvious one. While this season was pretty slick, I still regard Fumoffu! as being the best.

Glass Fleet – Funimation
Ha! Good luck with this, Funimation! Glass no Kantai! Seriously, this anime tied with Air Gear as being the worst anime of Spring 2006. That’s how bad it was. So bad, in fact, that it could be good. I take it back! You’re a genius, Funimation!

Gunbuster – Bandai Visual
I’ve also never seen Gunbuster either. Apparently it came out in 1988. I was 5 years old back then. See? I told you retro anime was making a comeback!

Guyver: The Bioboosted Armor – ADV
I remember seeing a crazy Guyver live action movie when I was in middle school. Powered armor falls under the mecha category, so this anime = !win.

Hello Kitty: Stump Village – Geneon
I’ve never liked Hello Kitty (she’s not even cute!), so I don’t see any reason to be interested in the anime. Do they even have dialogue in this?

Karakuri Kiden Hiwou Senki – Bandai
Another anime that I’ve never heard of. In it, people use mechanized dolls to beat up a gang. “Mechanized dolls?” Sounds like mecha to me!

Nerima Daikon Brothers – ADV
I’ve wanted this anime to be subbed for a while now, so it made me pretty happy to see that it was picked up by ADV. It’s basically about a pair of radish farmers who strangley resemble the Blues Brothers. I’d seriously buy this if ADV does a good job translating it. Beta-Waffle has more on this particular anime deal.

Pani Poni Dash! – ADV
Yep, ADV must be a glutton for punishment. Pani Poni Dash is probably the hardest to localize anime ever! They did a pretty good job with Excel Saga, though. Jpmeyer compares it to Family Guy in terms of pop-culture references. I think it’s more like The Simpsons. You know, like that one episode that was just a long parody of that 1960s tv show, The Prisoner? Now that’s obscure!

Paradise Kiss – Geneon
I never really got into the Parakiss anime. But I’m sure there’s a lot of fangirls (and Os) that are happy about this one!

Solty Rei – Funimation
For some reason, I thought this one had been announced a while back. I only watched the first episode of this anime. Seemed kinda cliche and done before.

Super Gals 2nd Season – Right Stuf
I think this anime is about kogals. Y’know, the spoiled girls who spend all of their dad’s money on expensive tanning sessions so they look really fake? Not interested.

Wings of Rean – Bandai Visual
Yet another mecha anime. Why?

Disgaea Game Character Collection Artbook – Broccoli
I am of the belief that anything Disgaea is made entirely of win. My name is Hung Truong, and I approve this artbook.

Gakuen Heaven – Tokyopop
There’s a manga of this? In case you didn’t know, Gakuen Heaven is a BL thing. “BL” being boy’s love. Is the fat yaoi fangirl demographic really big enough to support this release? I guess we’ll see.

Kasimasi – Girl Meets Girl – Seven Seas
On the flipside, anything that involves yuri gets my approval. The Kashimashi anime was good, so I’m thinking the manga should be good, too. I hope there’s a lot of Ayuki…

Also noteworthy is the release of the Shinigami no Ballad novel. Hopefully this’ll pave the way for more Japanese light novels, since many new anime are being based on those (the most notable recent one being The Melancholy of Haruhi Suzumiya).

I was personally surprised that anyone licensed the Kasimasi manga. Not that it isn’t an awesome series, but yuri just isn’t something that gets much attention here in the states. I fully back it’s license though, and I am glad to find another fan of Ayuki. We must unite behind our megane goddess, yes?

scottfrye: FMP:TSR is indeed the second season of FMP. Originally, Funimation was supposed to have had the license, which was a bit of a shock given that ADV did FMP and FMP:Fumoffu – it turns out that ADV’s doing all the production work, at Funimation’s request or their own, while Funi handles the license and distribution. No complaints about that one, myself.

Black Lagoon, I don’t recall any news about it being licensed, but the whole “Geneon” thing in the credits seemed to suggest it was only a matter of time.

Ahh different Gakuen Heaven.. I thought they had somehow licenced the uber fanservicey one

I cant believe you. I hate you.

“Parakiss: Iâ€™m sure thereâ€™s a lot of fangirls (and Os) that are happy about this one!”

I’m honored. You hit right on the dot. Actually, before I noticed “(and Os)” I was preparing myself to say “I cant wait to fangirl all over it”, but I guess I’m my own woman.

BECAUSE YOU TOUCH YOURSELF AT NIGHT.

Why mecha? They probably see a market, not only for DVD releases, but obviously for toy models.

To me, Bandai is actually synonymous with robot toys. I dunno what other figures they sell though. But I have a 1/144 Destiny gundam at home from Bandai. No, I didn’t buy it. It was a friend’s gift from Japan.

> Solty Rei – Funimation
> For some reason, I thought this one had been announced a > while back. I only watched the first episode of this > anime. Seemed kinda cliche and done before.

It was mentioned in a C&D letter sent out a while back. FUNI accidentally mentioned a number of series that they hadn’t announced yet. It hasn’t been official up until this point though.

> Gunbuster – Bandai Visual
> Iâ€™ve also never seen Gunbuster either. Apparently it came > out in 1988. I was 5 years old back then. See? I told you > retro anime was making a comeback!

Manga Entertainment released this on VHS back in the 90s but for some reason, they never released it on DVD. Mecha fans have been waiting for this for years.

SuperGals Season R2 is an important announcement in that it never got an R2 release in Japan. In addition, the first season, which was released by ADV, had abysmal sales and was a commercial failure. TRSI’s license of this is essentially a gift to the fans as they will make little profit off of this venture.

I’m not a fan of the series and I’m certainly not saying you or anyone else should, but I think the significance of this should be at least be pointed out.

Here is another ParaKiss fan. Despite it’s few flaws I thought it was quite good and OP is amazing too, that’s probably first thing I remember when I think it.

To be fair, Wings of Rean is not your typical mecha anime, and it’s relatively short (6 eps). So why not?

>Wings of Rean – Bandai Visual
Yet another mecha anime. Why?

Yet another mecha anime. Why?
Two words: Yoshiyuki Tomino, the gundamÂ´s father…but that can talk someone never seen Ghost in the Shell series…you need seen more anime, but of good…!

Damn it! if they want to license an anime, why don’t they try to take hunter x hunter in rather than those stupids anime. I know this anime would sure be a major impact in the U.S because it beats any popular anime out there. it only proves that these companies don’t know what they’re doing.