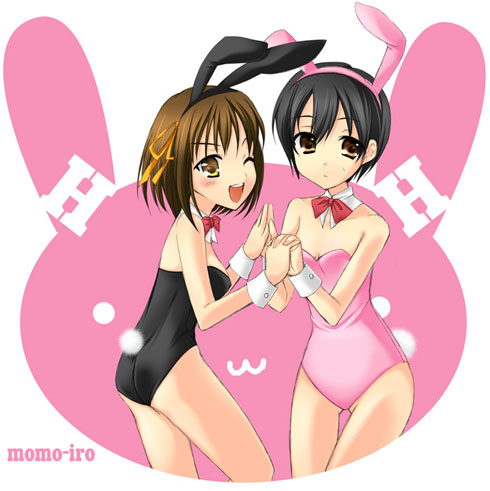 That’s right, we’ve been able to take a look at both of the Haruhis’ pasts. Fujioka was just as hard-working, and Suzumiya was just as melancholic! But which would you rather have as a kid sister? 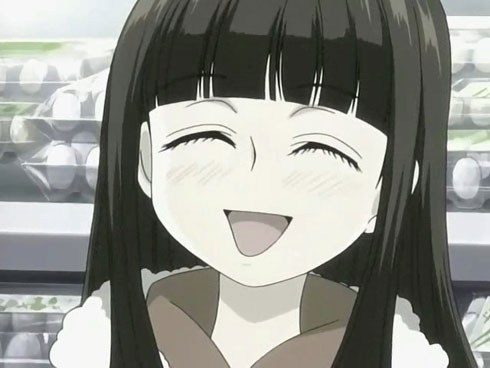 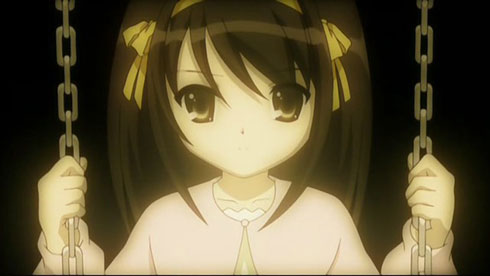 Suzumiya was emo even as a little kid, which affects her cuteness level as well.

22 replies on “New Poll: Haruhi vs. Haruhi Pt 2! Battle of the Loli Haruhis!”

A bit off topic perhaps, but Fujioka Haruhi never ceases being a loli.

I vote for Suzumiya for being the more contemplative and industrious loli.

What about loli Haruhi under the table?

a Haruhi who in spite of suffering genuine family hardship and being denied many of the opprutunities that a child should have had by circumstance, willingly picked up vacated responsibilities and grew up into a wonderful adult with a strong sense of self and moral uprightness…

a self absorbed little brat who was so crushed by merely the fact that she wasn’t the bright center of everything that she grew into a bigger self absorbed brat who walk over everything and everyone around her with no regard whatsoever in a selfish campaign to bring meaning into her own self inflicted emptiness.

It’s so hard to choose…maturity and growth versus denial and maladjustment.

I do have to admit that by Suzumiya Haruhi grew as a person by the end of the chronological series but her problems at the beginning of the series was entirely her own fault.

We seem to be forgetting that as Paradise Kiss Fujioka may look with that fringe, Suzumiya is still God. And God always wins.

She’s just irresistibly kawaii. Her maturity is/was far beyond her years and it makes her admirable. She’s just a great character overall.

By that logic Naruto’s the hottest kid sister around, how many minutes of screentime were filled with flashbacks of that god damn swing exactly?

For cuteness? Fujioka. Suzumiya isn’t cute by any standard. She’s like a natural disaster- she might have some terrible splendour or beauty, but she’s not cute. *Maybe* during that grass-in-the-face scene in episode 12. Being nice but snarking where it’s appropriate is cute. Being a whirlwind of existentialist rage at your own mundanity is impressive. But not cute. Especially when she uses that empowerment to run roughshod over the conventional types who can’t even imagine someone like her existing.

That said, if you want to compare them as characters, I find Suzumiya far more outstanding. Fujioka is stoic and sensible in the midst of a frivolous, snobby, and just plain annoying elitny. She’s a situational rebel. Suzumiya’s a rebel for the sake of rebellion, ‘a thing I like is obviously weird’ and all that. They have that in common. It makes both of them interesting in their settings. But Suzumiya would be interesting anywhere that even remotely resembles our world. Fujioka is only interesting because she’s surrounded by the Host Club, who bring out her perceptivity, her wit, and her past… like Kyon, she’d be a nobody (albeit a much high-achieving nobody) if she wasn’t surrounded by such eccentrics.

If I knew Suzumiya personally, I wouldn’t like her. Can’t let things like that whole computer extortion deal slide just because she has a lot of magnetism. But even if what she does with it is often wrong or meaningless, I’d envy her drive and pride. I’ve known an extraordinary person who made me question the value of a conventional life in the past, and I don’t think a fictional one would be any different.

Gah, that long-winded and I still don’t think I said what I wanted to. Well, it’s something to read, I guess.

Oh, and I honestly think that flashback-Suzumiya fails for cute points. At that point she’s not doing *anything* but being vaguely pissed, and she’s still nobody special. Highschool Suzumiya makes better faces. The swing does nothing.

(Kyon should seriously spill out his woes to Fujioka since his concerns over the Diet’s fiscal issues, postal reforms, social safety net and finances are not that far off the radar from Fujioka as Suzumiya Haruhi terrorizes the Ouran club with acts of god…)

Suzumiya and Fujioka are so different that even as loli I have a hard time with this. Both of them are not about invoking pity but they resort to very different means to get to where they are. In some sense Suzumiya is Fujioka’s antithesis (but that’s the high-school era Haruhis)

Suzumiya’s narriative paints out a picture of herself very clearly with her loli days and the piece invokes thought whereas Fujioka stands out less since Suzumiya and the number crunch is rather unique. Suzumiya fails to make peace with the nature of things and sets forth to change everything later on while Fujioka accepts the surrounding but not herself.

She has more of a loli and cuteness factor to her than Suzumiya.

Fujioka, any day. Because Fujioka has other personality too. =D

yes….i am having quite a difficulty deciding wich. i mean haruhi s. is real cute and all but shes self absorbed and imature…and after that computer blackmail incident im not sure if i would even consider her even minorly sane. but haruhi f. has a certain cuteness factor to herself. like a whole cuteness complex that comes out wen wearing pink. yes haruhi s. is god but haruhi f. is like, the mother of the host club (no offense to kyouya who also does a greatjob at mothering that asshat tamaki). soooo i guess i dont really know wich one i wud choose… oh yes THE SWING SCENE!!! the start of the realization of haruhi s. emoness. gosh so much screen time wasted for that scene.

just becuz i watched the suzumiya first doesnt mean i can bet on her,

Fujioka is a nice romantic comedy on the end, and silent love

Suzumiya is a comedy WHICH DOESNT HAVE LOVE STFU NAGATO

MY 1000 VOTE IS FOR FUJIOKA HARUHI

Haruhi Fujioka!!!! She is soo cute and is the best!

Sorry but i would have to Haruhi Fujioka wins to the most cute. I mean Suzumiya isnt that cute as the other Haruhi. Its just her personality doesnt fit it so much.

Absolutely Fujioka! She is sooooo cute!

but i have to say i like fujioka haruhi better. she’s cuter. maybe because i watched ouran first but i think the melancholy of haruhi suzumiya is kinda overrated.