Since everyone else is doing it, here’s my quick look at the recently announced Summer 2006 Anime Season! As always, my opinions will be based purely on pictures from the anime’s official sites and often confusing translations from anidb: 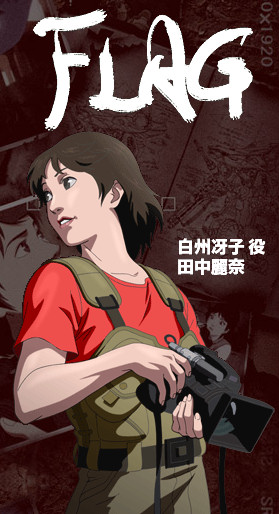 Flag seems to be an anime about, well, a flag. Not any normal flag, though, this one has the ability to end a civil war! But the flag gets stolen by terrorists! Okay…

The characters seem kinda rugged, and the anime also sports mecha, which I’m not a big fan of. I’m not really anticipating this one, but as they say, new anime is good anime (I don’t know who really says this).

There’s not much translated info on this anime. What I got from the trailer is that most people don’t use most of their brains. This kid appears to be able to use 100%, which lets him break windows and stuff. The site for this anime is also pretty psychedelic. Also, the name is just plain funny. I’ll definitely check this one out. 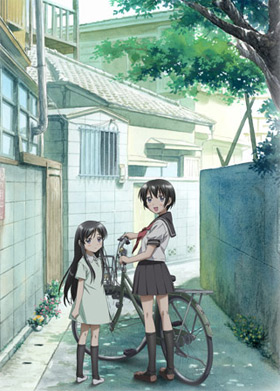 I like to translate “Binbou Shimai Monogatari” as “The Legend of the Financially Destitute Sisters!” It’s anime about sisters, and they’re poor! While this might not make for action-packed thrills, I have a feeling it’ll work the same way as Binchou-tan. You’ll feel so sorry that you’ll have to keep watching! Plus maybe these girls will be as cute as super poor Fujioka Haruhi! 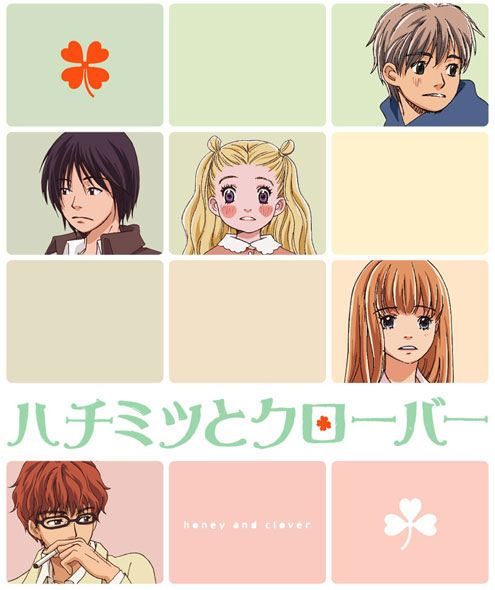 Honey and Clover II (Electric Boogaloo)!!! Yes, as a huge fan of the original anime, I’m definitely looking forward to this. Honey and Clover is really just a simple story of a group of college students, but it makes for good anime. It might be a little romanticized, but whatever. After watching the OVAs, I’m really pumped for the new season, enough to almost kick my mom right in the face! I should really pick up the manga…

That’s all for now. Next time, I’ll preview some of the anime premiering in July.

I’m curious about flag. This seems like a mecha anime, at which the main characters are actually a couple of photographers. It should provide a nice twist. Night Head Genesis seems to be brutally smashing people’s brains out, or something like that. In any case, I’m not looking forward to it. Binbou Shimai Monogatari seems like an interesting slice-of-life drama. I’m not really caring for Honey and Clover, though. The first season didn’t really motivate me to continue watching past the first two episodes.

I can’t wait for the second season of H&C. BTW nice 9rules logo you have there…

Binbou Shimai Monogatari looks like it could be something cool.

Flag has the easiest name to remember.

I LOVE HONEY AND CLOVER II.

I made the mistake of reading a discussion about what happens in the H&C Manga – now I have no interest in watching the second season.

When I do decide to watch a romance anime, I prefer to NOT watch ones where the romantic interests and triangles change every few episodes, and that’s all H&C manga turns into. The realism of the first half gives way to one long soap opera with a number of the characters continually fluctuating between who they are attracted to.