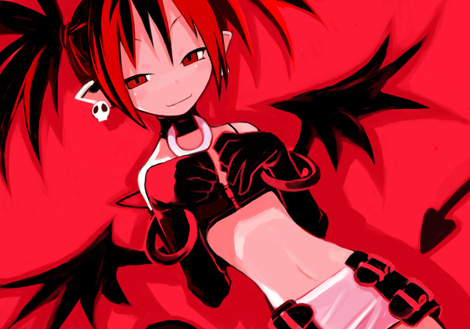 So you may or may not know that I’m a huge fan of Nippon Ichi and their video games. The game that I am most obsessed with to this very day is Disgaea. Sure, the anime might be a little on the dumb side, but it’s freakin’ Nippon Ichi!

I just got my NIS America E-Newsletter today, and in it they remind me to buy the new Disgaea figures that go on sale today. Diabolical bastards that they are, they included this in the newsletter:

When we sold our first set of figures, there were 500 boxes available. Those sold out within 3 days! To respond to such amazing demand from our loyal Disgaea fans, we’ve managed to increase that number 650 complete sets this time around. But remember, quantities are limited, so make sure to place your order ASAP!

Evil! I’m really not what you would call a figure collector, but I am very tempted to pick up at least one of the two sets of figures. I present to you the figures: 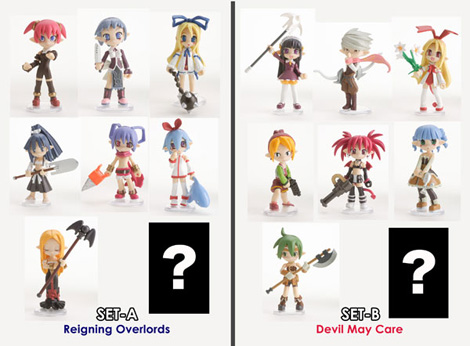 Set A has Fighter (female), Rune Knight, Flonne, Samurai, Laharl, Plenair, and Healer. Set B has Mage (prism?), Ninja, Flonne (the devil one), Thief, Etna, Archer, and Warrior (female). Each set also has its own “secret” figure. I’m thinking Set A is stronger, since it has Laharl, Flonne and Plenair. Set B does have Etna, though! Decisions! Maybe I’ll just get both.

The main question I have is this: is it really worth $39.99 for 8 figures that would probably cost 200 yen each in a gashapon machine? True, these might become rare (and worth more than their initial cost). Will I regret not buying them if these figures sell out in a day!? Will my buying these figures enhance the quality of the anime (this one’s a longshot…)? Am I playing into the whole otaku game that the mean otaku-hating lady was talking about? Am I making too big of a deal over some stupid figures?

Help me out here, resident figure collectors! And hurry, I think these figures are going fast!

Edit: I gave in and ordered Set A, plus a Prinny Plushie: 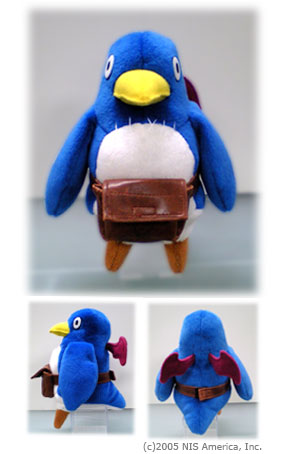 Actually, these were trading figures rather than gashapon, and sold for around 500y a piece. I paid around $60 for a box of 12 randoms when they were released in Japan, so the price isn’t too bad considering you actually know what you are getting (and looking at the 12 I have from series 2, I know I’m missing both of those ?’s).

The figures are quite nice, though. I liked them enough to come back for more, anyway, as I have a box of 10 randoms from the first series as well.

Though Set A, the one I wanted to buy, already seems to be sold out…

Really? It’s in my cart right now. And I’m getting some weird database error when I try to submit my order. The site wasn’t even responding for the first 30 minutes for me…

Seems they updated their page, because it works now. I just placed my order. However. before the two items were split, and attempting to chose A resulted in the message “this item has been sold out!”. Hopefully everything works out.

Yeah, I finally got my order in. Ordered Set A and a Prinny Plush. Damn it, I’m such a tool! A tool in love with you, Nippon Ichi.

[…] I posted in the original, I gave in and bought the figures plus a prinny plush. So was it worth the $60? Will this purchase […]