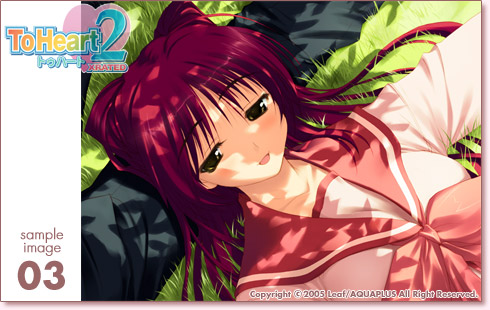 This was because Leaf had used the XVid video codec inside their games. XVid is licensed under the GNU Public Library (GPL). When software using GPL licensed code is released to the public, the GPL requires that the source code be made available to the programs users. For a Â¥600 shipping and handling fee, Leaf will ship a copy of the code to anyone who requests it.

Wow, I had no idea that there was such a rule! I wonder if any of the company’s competitors would make use of their source code.

A Space Ninja CYOA would be pretty cool though. ;D

Wow, the source code for clicking and having another row text show up, that’ll save me some trouble.

I dunno, ayyo. I have a feeling that writing a gui and all the code for an H-Game is non-trivial. At least, it would be for me. Sure, it’s simple compared to a FPS, but still…

Not saying it’s exactly trival, while maybe I am, but I have a feeling a BT cilent’s gui is more coding then programming a h-adv’s. I may be wrong since I don’t have the code, maybe it’s full of wonders and magic, but my point was, especially for visual novels, that it’s the substance that counts, not the code.

ayyo – I see what you’re saying now. I suppose the biggest roadblock to getting any of my games made would be the substance part. Especially that Doraemon XRATED one…

Rest assure tho, anyone who might even be interested in a Doraemon XRATED could probably care less as long as it has a CG Recollection and the Xrate stuff of course, haha.

Is it safe to assume that wer’ll be seeing a lot of open-source H-games in the future? ‘Cos I’ve been dying to play a H-game on Linux…! :-}

Does any one here have a link to the source code for the games?

open-source?
Does any one here have a link to the source code for the games?
thk all!

I suppose this would be a fanboy’s dream fantasy come true, huh? 😛

And yes, I’m on with ayyo on “substance” in an in-the-making H-game. What substance should you put in an H-game, anyway?