Alright, so I already posted these as seperate posts, but since I wrote them pretty early in my blog’s life, and I don’t have much time to write new stuff due to the holidays, I thought I’d fix up and consolidate my top 5 anime of 2005 into one uber post! Without further ado, here are my picks for top anime of 2005:

Alright, so I already posted these as separate posts, but since I wrote them pretty early in my blog’s life, and I don’t have much time to write new stuff due to the holidays, I thought I’d fix up and consolidate my top 5 anime of 2005 into one uber post! Without further ado, here are my picks for top anime of 2005: 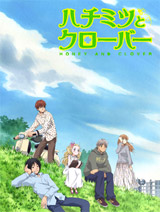 I was really surprised by how enjoyable this series was to watch. Basically a slice of life anime with one particular insane gag character to keep it interesting, this anime kept my attention until the very end. The thing is, nothing monumental happens. No giant Gundams are forced upon the characters, no magical powers are given to the girl. Even so, all of the characters are well developed, and the art style is really cool. I especially like the water color backgrounds used in the animation.

As far as cuteness goes, Hagu holds up nicely, although I find it kind of creepy that these college students are infatuated with a girl who looks like she could be 8 years old…

The OP by Yuki, "Dramatic" is great, and so is the ED by Suneohair. I liked it so much I made it my cell phone’s ringtone! The first ED could have stayed for the whole series as I was not too fond of the second ED.

Overall Honey & Clover was one of my favorite anime of this year. Hopefully it gets licensed along with the manga so I can check out what happens after the TV series’ end! 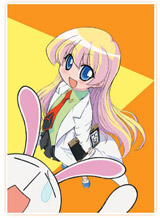 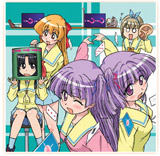 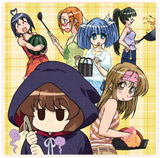 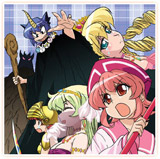 Say what you will about crazy gag anime, but I like them. Pani Poni Dash is yet another anime that is set in a high school with a short person as the main character. You’ll recall Azumanga Daioh had a young genius Chiyo-chan, and Sensei no Ojikan had the short teacher Mika. In Pani Poni Dash, we get the best of both worlds with Rebecca Miyamoto, a short, young genius teacher!

There are a lot of things in this series that seem like a rip off of other shows, but remember, this is a mainly a parody anime. With that in mind, the character designs are really original. The characters are all damn cute (even the "plain" ones), and the animation is among the better that I have seen.

Because the series has so many parodies, one thing to watch out for (at least in the Oyasumi subs I’ve been watching) is the insane number of obscure cultural references thrown into the show. Personally, I like knowing about the small blurry object that just flew past the screen in .03 seconds, so I keep the pause button handy.

The OP is above average, and so is the ED. The animation for the OP is a pretty cool mission impossible type spy intro. I’d also like to note that the ED contains some good examples of Engrish (Girlppi?)

I haven’t finished watching this series yet, so I can’t say whether it will continue to meet my expectations or flop like a dead fish. Hopefully it’ll remain one of the best anime "of the year!"*

*if you haven’t watched yet, you won’t get this reference!

My next pick for top 5 anime of 2005 is Bokusatsu Tenshi Dokuro-chan, which translates to "Beat to Death Angel Dokuro-chan." This series combines the the violence of Elfen Lied (ok, maybe not quite as much violence) and the cuteness of Pita-Ten (ok, maybe not quite as cute). Dokuro-chan is a guardian angel for Kusakabe Sakura, but she doesn’t do much protecting. Actually, basically all she does is put him in compromising situations (read: seeing her naked), beat him to death for it, and then revive him with her magical spell (pi piru piru piru pi piru pi!). This anime basically has no plot, besides Dokuro finding new ways to expose herself and in the process, kill Sakura, but it’s an OVA, so I can forgive it a little.

Because it’s an OVA, the character design for the 4 main characters and animation is excellent. You really learn to appreciate the super high framerate blood and gore animation that an OVA provides. Dokuro-chan is top among her peers in cuteness too, unless you count the scenes where she’s having diarrhea (you need to have seen the anime to understand).

The OP is fun and catchy, and it’s running in my head as I write this. The ED is pretty slick too. I’d recommend both, although I can’t see myself driving in my car while "pi piru piru piru pi piru pi" plays in the background…

This series is short, only 4 episodes long (well, 8 if you believe their marketing department), so it’s basically a no commitment anime. Overall, the high animation quality and excessive violence do it for me as I name Bokusatsu Tenshi Dokuro-chan one of 2005’s top anime.

Animal Yokocho translates to "Animal Alley." The plot revolves around this 5 year old girl and cute animal friends that visit her from a secret door in her room. Ok, so I know what you’re thinking. You’re thinking this is a kid’s anime. Actually, I’m not too sure myself if this anime targeted at kids, but I like it anyway. What you really get is a weird gag show (which seem be be prominent on my top 5, I’ve just now noticed) that sort of resembles a kid’s show in between the weirdness. The animals, Iyo the rabbit, Kenta the bear, and Issa the panda (making this anime a bit bear-heavy) pretty much torment Ami-chan as she tries to live a normal kindergarten life. There’s also a horse (that resembles nothing like a horse) named Yamanami-san that drops by from time to time.

The animation really isn’t that great, but I think the animators do a good job with what they have. The characters are all fairly cute. Nothing spectacular here though. The show mainly counts on its multiple comedy gags and occasional parodies to keep it going. I find it especially entertaining seeing the normally cute characters make their surprised reaction faces. I’ve included a bunch of those with the screencaps.

The OP is this sort of schizophrenic ska/rock tune. Good enough for an OP, I guess. The opening animation complements it well. The ED, "Fantasista Girl" done by The Indigo is surprisingly good. You might recognize The Indigo from their songs on series like Ai Yori Aoshi and Someday’s Dreamers.

This series is still fairly new, but I was pleasantly surprised at how much I enjoyed it, so for that it has a place in the top 5 Anime of 2005.

The final anime in the top 5 anime of 2005 is Mahoraba ~Heartful Days~. I wrote earlier that these anime are in no particular order, but I didn’t say that I couldn’t pick the best for last! This show is another slice of life anime following the story of Shiratori Ryuji and the other residents of his apartment complex. Most of the fun of this series has to do with the other residents dragging Shiratori from his homework and making him do things for them. In each episode you learn more about each character, and they’ve all got a backstory involved. I really love how Asami-chan is so poor that she has to water down her orange juice before she drinks it. Kawaii!

All of the character designs are unique and way cute (er, except perhaps the old man with a dog puppet). In fact, even the male lead is cute (and dresses in drag a few episodes too…)! Actually, one issue I have with this show is that the characters might in fact be too cute. Shiratori looks like he could pass for a middle school student. He really doesn’t seem like a college student at all.

The OP and ED are pretty standard fare here. They’re not the reasons I watch this anime, and they’re decent enough to do the job. The ED features some pretty cute picture book-type drawings.

All things considered, it’s really the awesome character designs and character development that make this anime my favorite of 2005. If you haven’t checked it out yet, I would definitely recommend this.

As a matter of fact, all of the anime in the top 5 that I listed are unlicensed and available right now at animesuki.com. You have no excuse, go forth and bittorrent!